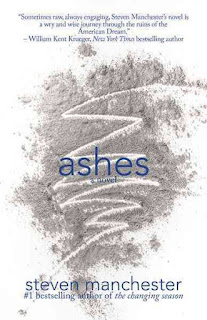 
Jason and Tom Prendergast may be brothers but they haven't had anything to do with each other for years. Raised by an abusive single father, the boys went their separate ways and never looked back. But when their father dies, his last impact on their lives is to push them together into a road trip across the country to spread his ashes and receive some sort of mysterious reward. Neither brother wants to take the trip, but they can't resist the potential inheritance that may be waiting for them at the end.

Ashes by Steven Manchester takes us along for the ride while Jason and Tom are forced to spend an entire week in a car together, unwillingly revisiting their past because of the one man that they both can agree to hate. The frustrations of hearing them speak but not listen to each other, and the humorous antics they adopt to annoy one another, make the ride rather bumpy but entertaining for the reader. Their dysfunctional childhood is brought to life as they reminisce about the way their father simultaneously brought them together and drove them apart.

I enjoyed these two brothers who drove me crazy at times. There's a lot more to the story than just the past. We get a glimpse into their current lives in which they both face challenges and changes. Both men grow throughout the ride, not just in their relationship with each other but also as individuals. It's definitely a character-driven novel that takes them both through important life changes.

If you enjoy humorous family stories, and the adventure of a road trip, I recommend you pick up Ashes by Steven Manchester, which will be released tomorrow.

Read my reviews of other books by Steven Manchester:
The Rockin' Chair
Gooseberry Island
Pressed Pennies