Book Review: With Love from the Inside by Angela Pisel 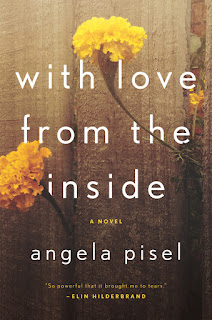 Grace Bradshaw's execution date has been set. Her last appeal has been denied. Her 17 years on death row will finally come to an end as she is put to death for the murder of her infant son due to Munchausen by proxy syndrome. She was essentially convicted of making her son sick in order to get attention. But before she dies, Grace wants to reunite with her daughter who stopped visiting the prison 11 years ago when she decided to put her past behind her and live a new life.

With Love from the Inside by Angela Pisel is a novel about two women trying to understand how they ended up where they are. One, Grace, is a mother who suffered the greatest loss ~ the death of her child ~ and then essentially lost another child who turned away from her during her imprisonment. The other woman, her daughter Sophie, is a woman who has made a life for herself completely based on a lie. Her husband, his family, her friends and coworkers all believe her mother is dead, not imprisoned. But when Grace's lawyer is finally able to find Sophie and tell her that her mother's execution date has been set, she realizes that she needs to know the truth about what happened.

The story is told in alternating chapters from the points of view of Grace and Sophie. Through Grace, we are able to see the inside of death row, and a glimpse at some of the women who make up Grace's community. Her chapters often include journal entries addressed to Sophie. Through Sophie, we get to see the truth unfold as she digs into the past to understand more about her little brother's death.

I really enjoyed this novel. It's well written, the characters are realistic and likeable, and the storyline holds together from beginning to end. Pisel has done extensive research on women on death row and it's evident in this novel. Emotional, suspenseful and full of love, With Love from the Inside will pull you inside the world of these two women.

This review was written based on a copy of With Love from the Inside that I received from the publisher in exchange for an honest review. This post includes Amazon Affiliate links. If you purchase something using my link, I will receive a very small commission but your price does not change.