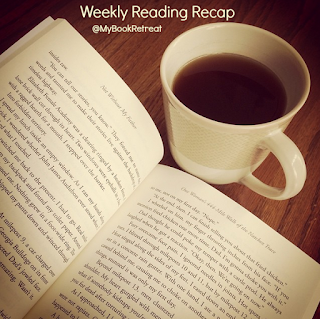 Hello there. Thanks for stopping by. It's been almost a month since my last blog post! I'm getting worse rather than better at this whole writing thing. I've been busy with life and dreading getting back on my computer after work, even if it is to do something fun like talk about books! Hopefully I can get motivated since I have several reviews to catch up on. In the meantime, I thought I'd tell you about my month.

June was an eventful month, that's for sure. My kids finished school; C is now a rising 7th grader and M is a rising 4th grader. They are both still avid readers and have already read several books each this summer. Since school ended, we've had M's dance recital, their piano recital, and we took a family trip to NYC. That was a blast! We went to the Statue of Liberty, Ellis Island, the World Trade Center, Central Park, Times Square, and to two shows: The Phantom of the Opera and Wicked. It was so much fun!

I've been finding some time to read along the way as well. Here's what I've been reading lately.

The Fifth Wave by Rick Yancey was a great sci-fi novel about aliens invading Earth. I don't think I'll continue the series, but I will watch the movie at some point.

Beautiful Ruins by Jess Walter was my June book club selection. It was okay, but I think I would have enjoyed it more if I had realized that it was supposed to be satirical. My whole book club felt the same way. When the host read the second discussion question that mentioned it being a social satire, we all suddenly got it!

The Red Tent by Anita Diamant was recommended by my friend Andrea at Good Girl Gone Redneck. I enjoyed this story of a girl growing up during biblical times. It reminded me of The Secret Chord by Geraldine Brooks, another novel that is based on biblical figures.

I'm now trying to decide what to read next. I'm actually taking a day off from reading so I can get some blog writing done and then I have a few books on my bookshelf and several on my Kindle that I can choose from. I'm not sure which will be next.

I haven't published anything recently, but I am going to spend some time this weekend writing book reviews. I need to catch up on several reviews, including the three books mentioned above. I have several that I read a few months ago as well, so I may come up with a shortened review format for those. That way I can at least get them published so you can see what I thought of them!

To help with this effort, I've decided to join the Sit Down and Write write-a-thon. I'm hoping to focus on getting back to writing in July.

What my kids are reading

M, who is now a rising 4th grader, finished all of the published books in The Land of Stories series by Chris Colfer. She's anxiously awaiting the arrival of the next book in the series when it publishes next week. She also read Savvy by Ingrid Law and Matilda by Roald Dahl. She's now halfway through The BFG by Roald Dahl.

Carter, who is now a rising 7th grader, is studying World War I with a friend, so he read The War to End all Wars: World War I by Russell Freedman and Truce: The Day the Soldiers Stopped Fighting by Jim Murphy. He has also read a few novels since my last update but we already returned them to the library and I can't remember the titles! I do know that he also read one of the Land of Stories books that he hadn't gotten to yet, Matilda and The BFG; I just can't remember the rest.

Book links in this post are Amazon Affiliate links. I'm linking up with Book Date for It's Monday! What Are You Reading? as well as Unleashing Readers and Teach Mentor Texts for the children's and YA version of this weekly gathering.

What are you reading? Please share in the comments!