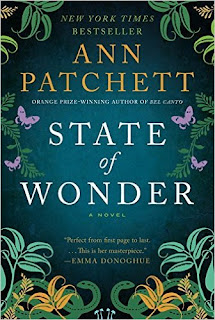 Dr. Marina Singh is upset to hear of the death of her colleague Anders Eckman in the Amazon rain forest. Anders had traveled there to check up on the progress of a drug in development by Dr. Annick Swenson. The big pharma company that they work for wanted to ensure that the research was on track but no answers were provided before Anders died. Now Marina is sent to Brazil to look into the progress herself, and gain a deeper understanding of Anders' death at the request of his wife.

State of Wonder by Ann Patchett is a unique story that gets at the way pharmaceutical companies research plant sources for new drugs. I enjoyed this different sort of storyline that takes the reader into the jungle and shows how Dr. Swenson and her researchers live with the indigenous people, trying not to interfere with their lifestyle too much, but obviously having some effect. The drug that they are researching was quite interesting and presented some moral and ethical issues, as I'm sure some drugs do. The novel provided lots of discussion points to cover during my book club meeting earlier this week.

Our group had two issues with this novel, though. First, there are just too many implausible things that happen in this story. I can't get into specifics without giving away the story, but even those who really enjoyed the book admitted that there were some things that were very difficult to believe. The other issue brought up by many was that the characters were all rather flat. The consensus was that the character of Easter, a deaf mute boy from an indigenous tribe, was the most appealing character. We also agreed that Dr. Swenson, while not a very likeable character, seemed true to character as a researcher who would want to spend decades in the jungle doing research.

I have mixed feelings about State of Wonder. On the one hand, I read it in two days and never felt like I wanted to put it down. It kept my attention and entertained me for several hours. On the other hand, when I really look back at the story, the issues that were brought up during book club are definitely problems I had as well. I do think that if you don't mind when an author goes a bit beyond the believable, this may be a good pick, because the story is quite unique and the mysterious aspects remained mysteries to me until they were revealed in the end. Just know that everything will not be tied up in a neat bow at the end. But I know there are plenty of readers who prefer that.

This review was written based on a copy of State of Wonder that I borrowed from the library. This post includes Amazon Affiliate links. If you purchase something using my link, I will receive a very small commission but your price does not change.