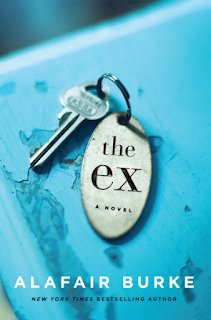 Twenty years ago, Olivia Randall ruined Jack Harris's life. Now her ex-fiance is accused of a triple murder and his daughter has convinced Olivia to take on the case as his defense attorney. She is sure that there's no way he could have committed the crime, but the prosecution is convinced otherwise. She needs to help him prove his innocence to make up for what she did to him so long ago. It looks like he may have been framed, but can she prove it? How can she get at the truth?

The Ex by Alafair Burke is a combination of legal and psychological thriller. Olivia spends a lot of time going through the evidence and trying to unearth the proof they need to show Jack's innocence. There isn't a lot of courtroom time but there is a lot of investigating and digging into the details of what actually happened. There's a whole psychological aspect to the story as well. First, there's the relationship between Olivia and Jack and the effect it had on the course of their lives. But there's also the question of whether Olivia really knows Jack as well as she thinks she does. She is convinced he could never kill someone, but what if she's wrong?

What I love most about The Ex is the characters of Olivia and Jack. Olivia is a strong, independent woman who stands up for what she believes. Jack is a kind widower with a daughter he cherishes. But both are also complex, flawed characters, making them quite realistic. Their history is a mess and has a huge impact on how they handle the case. We get to learn more details about their relationship and their breakup ~ from Olivia's point of view ~ and in the process get to know each of them a little more deeply.

Burke doesn't get into the other characters nearly as much. Jack's daughter and his best friend are integral to the story, providing support and encouragement along the way. The prosecutor on the case is also a key supporting character who has a big part in the story. But we don't get to hear as much about what these characters think and feel as I would have liked.

Overall, The Ex is a page-turner that features engaging characters and a complex but believable storyline. If you enjoy thrillers that make you wonder who's telling the truth, I highly recommend it.

See more reviews of The Ex by Alafair Burke

This review was written based on a copy of The Ex that I received from TLC Book Tours in exchange for an honest review. This post includes Amazon Affiliate links. If you purchase something using my link, I will receive a very small commission but your price does not change.