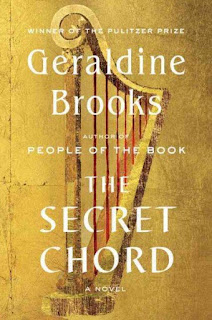 David is a complex man, a noble warrior, a musician and poet, the second king of the United Kingdom of Israel and a prophet, according to the Bible. He is an important religious figure in Christianity, Judaism and Islam. Even those who are not religious have heard of David's victory over the giant Goliath in the well-known Bible story. But who was David as a man and how did he rise from shepherd boy to king?

In The Secret Chord, Geraldine Brooks brings this biblical figure to life, from his humble beginnings to his rule over Israel. I found her depiction of this man and his life to be engaging, but I found myself more intrigued by the life of Natan, the prophet who tells the story. He's just a boy when he becomes David's prophet, yet his abilities endear him to this man and their relationship is quite fascinating, despite the way it began. I did enjoy reading about David's complexity, though, from his brutality on the battlefield to his ability to render beautiful music and poetry. And I love the way his life unfolds through the stories of his mother, brother and other people in his life, as Natan interviews them to write David's life story.

This is my first book by Brooks. I've hesitated reading her stories because I knew they would require a lot of concentration, and this one did. In an author's note, she explains that she uses names in the transliteration from the Hebrew of the Tanakh, which made it a bit more difficult to read since almost all of the names were new to me. I found myself stumbling over them often. But I enjoyed the novel and will definitely pick up another book by her when I'm in the mood for this sort of challenge. She uses beautiful language and truly brings the characters and the setting to life.

There's quite a bit of violence in this novel, including rape and the death of women and children. Brooks also does not present a perfect picture of David, which may turn off some who are have a more positive image of him. While he has noble characteristics, Brooks seems to lean more heavily on his less savory attributes. I found this to be a good thing because I felt that this was perhaps a more realistic depiction of a man who would rise to be king at this time in history.

Overall, I enjoyed this story of David and Natan. If you have a favorite Geraldine Brooks novel, please share it in the comments!

This review was written based on a copy of The Secret Chord that I received from Viking/Penguin in exchange for an honest review.

Take this fun quiz: Who said it: The Secret Chord or Game of Thrones
Visit the author's website