Book Review: The Art of Crash Landing by Melissa DeCarlo 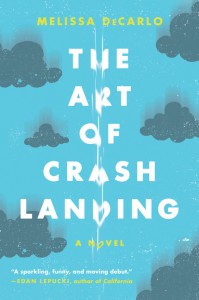 Mattie Wallace's life is not going so well right now. Single, pregnant and without a place to live, she's pretty desperate and worried that she's following the same path as her late alcoholic mother who fills her memories with regret. With news of a possible inheritance from a grandmother she never knew, Mattie heads to her mother's hometown, a tiny town in rural Oklahoma, hoping for some money to ease her troubles. What she finds is a mystery. Why did her mother, who was seemingly happy, suddenly leave this town many years ago? And how did she become the damaged woman that Mattie knew?

The Art of Crash Landing by Melissa DeCarlo is filled with some amazingly realistic characters, and that's what generally draws me to a book. There's Fritter, a friend of Mattie's grandmother who gives Mattie a job at the library; Tawney, Fritter's great-great niece who is a bit of a troublemaker; Luke, the paralegal who lets Mattie stay in her grandmother's house; and JJ, the mechanic who seems to hold a grudge against Mattie for some reason. They are all people who I could see encountering in real life, with positive and negative attributes, and realistic reactions to the situations in which they find themselves. I love books that are filled with characters like that, and I loved this one.

The story jumps around from the present day to Mattie's younger days and back to her mother's and grandmother's time. It's not confusing, though. The story unfolds in both present day and in the past in a smooth way. It goes into a lot of detail about her grandmother's life and experiences, which have a direct impact on where Mattie finds herself now. And it follows her relationship with her mother and the way everything came crashing to an end.

The Art of Crash Landing is a heartbreaking and emotional story. But it's also funny and uplifting. Mattie's struggles are real and the way she dwells on her relationship with her mother is as well. DeCarlo could have gone a few different ways with different aspects of the story, but I was completely satisfied with where she takes Mattie and the other characters, even if everything isn't tied up with a little bow at the end.

If you're looking for a wonderful character-driven novel, I highly recommend The Art of Crash Landing.

This review is written based on a copy of The Art of Crash Landing that I received from TLC Book Tours in exchange for an honest review. This post includes Amazon Affiliate links. If you purchase something using my link, I will receive a very small commission but your price does not change.