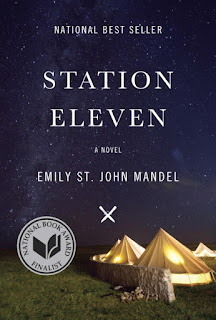 Kirsten Raymonde is a child actor in a production of King Lear when the lead actor, Arthur Leander has a heart attack on stage. Jeevan, a member of the audience, tries to save him but does not succeed. That night, a flu epidemic begins to spread around the world, bringing civilization to a halt. Fifteen years later, Kirsten is traveling the Great Lakes region with the Traveling Symphony, playing music and performing Shakespeare for the survivors.

by Emily St. John Mandel is a post-apocalyptic novel that is beautifully written and character-driven. It reads more like literary fiction than a typical post-apocalyptic novel. It's about the survivors of the flu and the way they learn to live in this new world, but it also brings us back to the time before where we get more depth of characters. The past story mostly revolves around Arthur, his many wives, his son and his connection to some of the survivors. The future is mostly about Kirsten and the Traveling Symphony, which has a run-in with a so-called prophet during their travels. But we also get to see what happened to a few of the other characters we meet in the past.

I really enjoyed this unique novel. I found the flu epidemic that ended civilization as we know it to be believable. The Traveling Symphony was an interesting group of people, and Arthur's story of fame and its effect on his life seemed quite realistic. The characters are what make this novel engaging, and the style of writing kept me turning the pages. Even if you're not a big fan of apocalyptic stories, I recommend you try this one. It's a different sort of take on the genre.

This review was written based on a copy of Station Eleven that I purchased. This post includes Amazon Affiliate links. If you purchase something using my link, I will receive a very small commission but your price does not change.