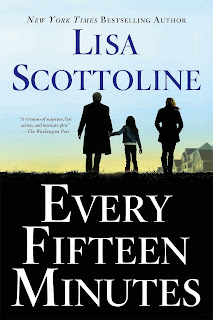 Dr. Eric Parrish, chief of a hospital psychiatric unit, is having a tough time coming to terms with his separation from his wife and the limited time he has with his daughter. But work is going well; his unit has been recognized as number two in the country and everyone is celebrating his leadership and success. Then he takes on a new patient named Max. A boy who has OCD and is obsessed with a girl. A girl who ends up dead.

by Lisa Scottoline is a thriller that keeps the reader guessing straight through to the end. Eric is determined to help Max, but is that the right course of action? There’s always a question in the back of your mind as to whether Max did it or not. And when Eric, by helping Max, implicates himself, things get even more complicated. There are lots of twists and turns in this one. What makes it more interesting is that we hear from a sociopath who seems to be behind everything, but their true identity isn't revealed until the end.

In addition to this mystery, the novel also delves into Eric’s relationship with his daughter and his estranged wife, who has taken actions that are leading Eric to push for changes to their custody agreement. This provides a nice parallel storyline and a different type of mystery about how Eric will keep his close relationship with his daughter in light of this new attitude from his wife.

Overall, Every Fifteen Minutes is a complex yet not too complicated thriller with a main character that I rooted for, even though I cringed at some of his decisions. It kept me interested and guessing through to the end.

This review was written based on a copy of Every Fifteen Minutes that I borrowed from the library.