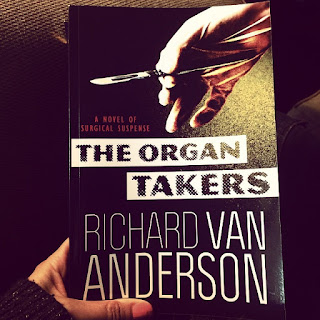 David McBride has just been given the chance to get back into the operating room after making a costly error in judgement early in his career. But before he can start in his new role, he's talked into performing illegal organ harvests for a good deal of money. David and his wife are struggling on her income, supporting his father who needs 24-hour care, and living in a low-end area of town. The money will help. What he doesn't realize is that the donors are not willing participants.

The Organ Takers: A Novel of Surgical Suspense

by Richard Van Anderson is a suspenseful thriller that is full of surgical details that make it clear that the author is a former heart surgeon. I expected more of a horror or gruesome story, but it was not ~ which is a good thing in my opinion. When David arrives for the first harvest, he tries to get out of it. But he and the others helping with the operation are all forced to go through with it under threat of violence against their families.

The novel isn't just about David's predicament but also about the morals and ethics related to organ transplants in general. What lengths would a person go to if their own child was in need of a transplant and wasn't high enough on the list? If someone is willing to donate an organ to another person in exchange for money, should they be able to do it? I found myself thinking about these issues while reading this thriller.

The Organ Takers is a quick read ~ I actually read it during a readathon last month. The author does delve into a lot of medical detail, but I found it quite fascinating. If you like that sort of thing, you'll like it here too. I wasn't crazy about the ending, mostly because the reader is left hanging a bit since there will be a sequel. But some things were wrapped up well.

If you're looking for an engaging, suspenseful story with a character that you can root for, check it out!

This review was written based on a copy of The Organ Takers that I received from Claire McKinneyPR, LLC, in exchange for an honest review. This post includes Amazon Affiliate links. If you click on a link and make a purchase, I will receive a very small commission but your price remains the same.