Book Review: At the Water's Edge by Sara Gruen 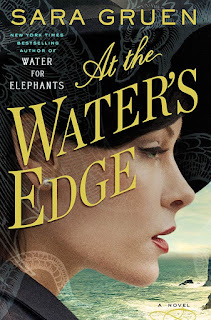 After making utter fools of themselves during a New Year's Eve party that ushered in the year 1942, Maddie and her husband Ellis are cut off by her in-laws. Her father-in-law, a former army Colonel, is already disappointed in Ellis because he got out of fighting in the war due to being color blind, and her mother-in-law despises Maddie. Left with nothing, Ellis convinces Maddie and their friend Hank to help him on an adventure to prove himself to his father.

At the Water's Edge

by Sara Gruen takes us on this adventure to Scotland in search of the Loch Ness Monster. The three travel across the ocean through the middle of the war and land in Scotland, weary and out of their element. Staying in a small inn in a small town, the men expect to be pampered as they always have, but Maddie begins to make connections with the people who work in the inn.

I enjoyed this unusual story, particularly because of the characters. Each is a complex individual with positive and negative traits, although for some these weren't quite as balanced as others. I especially liked the women of the inn, Meg and Anna. Maddie spends a lot of time reflecting on her situation and her marriage as the men go off to hunt the monster. There's a bit of mystery around not only the monster but also the different characters.

While this is historical fiction, and there is a war going on, it's more of a story of one woman's journey to find meaning in her life. It's a bit slow at times, and a bit over the top at other times. But overall, it is a unique story with interesting characters and a bit of a mystery to unravel.

This review was written based on a copy of At the Water's Edge that I received from Random House through NetGalley in exchange for an honest review. This post includes Amazon Affiliate links. If you click on one of these links and make a purchase, I will receive a very small commission and your price remains the same.