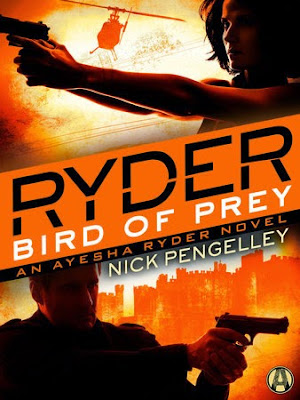 Ayesha Ryder thinks she's about to put her hands on the elusive Maltese Falcon, but then she finds her contact dying in an ally. As she evades his killers, she learns the British prime minister has been poisoned, and she has been pegged as the assassin. What makes this even more difficult is that the prime minister is actually her friend. On the run with librarian Joram Tate, Ayesha must find a way to prove her innocence and stop a dirty politician from dissolving the United Kingdom.

is the third book in the Ayesha Ryder series by Nick Pengelley. I haven't read the first two books, but that didn't take away from my enjoyment of this book. Pengelley includes some of her back story and references some entanglements that were clearly the topic of previous books. But this one stands alone just fine.

This is a fast-paced novel that's full of action and adventure. There's lots of intrigue and mystery, along with a bit of violence as is typical in a thriller like this. Ryder and Tate aren't just running from the bad guys; they are on an adventure to find a lost treasure. The style is reminiscent of the movie National Treasure, with clues that must be found and understood, and ancient relics to be uncovered.

I liked the characters of Ayesha Ryder and Joram Tate, as well as the archeologist they hook up with later, Niobe Bagot. Ryder is a tough woman but not unlikeable. Tate is quite mysterious at the start, and I found I wanted to know a lot more about him and his history. Bagot added a little fun and excitement to the story; she was so thrilled to be part of the adventure!

I found that the bad guys were too bad. I prefer when the antagonists have a bit more depth and show signs of both good and bad within them. I also wasn't crazy about the overwhelming focus on sexual attraction among just about every character. It just didn't feel real, and as someone who loves thrillers but doesn't enjoy romance novels, it was a bit much for me.

Overall, though, this is a fast-paced, fun and thrilling adventure novel that's full of action and suspense. You can buy the Kindle version of Ryder: Bird of Prey for only $2.99 now.

Or you can enter to win a copy below in this TLC Book Tours giveaway.

This review was written based on a copy of Ryder: Bird of Prey that I received from TLC Book Tours in exchange for an honest review. There are Amazon Affiliate links included in this post. If you use those links to purchase something, I will get a very small commission but your price remains the same.

Check out the rest of the tour for more reviews: