May 15, 2015
Welcome to my weekly series: Book Club Picks. This week, I'm sharing some 18th and 19th Century Historical Fiction novels that would be great choices for a book club discussion. I do have a few that address the topic of slavery in the United States, which is a pretty common topic for this time in history. But I found some others that cover different topics as well. 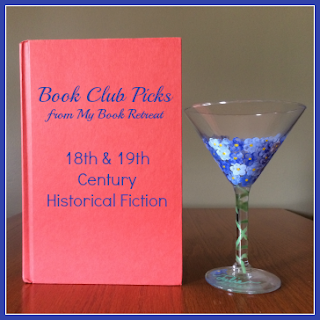 Someone Knows My Name by Lawrence Hill
Published November, 2007; 512 pages
Originally titled The Book of Negroes, this epic novel follows the life of Aminata Diallo from her childhood in Africa to her life as a slave in America and beyond. From the beginning, we know she ends up in London working with the Abolitionists. It's her horrifying and amazing journey to this point that will give book clubs plenty to talk about. This novel provides a unique look into how Africans were captured and forced into slavery. It also takes place at an earlier time than most books about slavery, showing the situation at the time of the American Revolutionary War.
My review
Discussion questions

The Invention of Wings by Sue Monk Kidd
Published January, 2014; 384 pages
This novel will give book clubs the opportunity to discuss the issues of slavery and women's rights in the early 19th century. It is told from the perspective of two women: Sarah Grimke and her slave Handful. The character of Sarah is based on real-life Sarah Grimke, an abolitionist and suffragist. The novel explores the opposition suffragists often faced, even from fellow abolitionists. In addition to slavery and women's rights, book clubs can discuss the relationship between Sarah and Handful, and society's expectations of women at the time.
My review
Discussion questions

The Mapmaker’s Children by Sarah McCoy
Published May, 2015; 320 pages
One more novel about slavery! This one focuses on the Underground Railroad, which is an interesting topic to explore. It also brings in a parallel storyline that takes place in present time, but ties back to the historical story. This means book clubs will not only be able to discuss Sarah Brown's experiences as the daughter of an abolitionist in the 19th century, but also the life of Eden, who is dealing with her own troubles in modern time. Topics of slavery, the role of women in the 19th century, infertility, and the way people in both time periods come together in times of trouble can be discussed.
My review
Discussion questions

Moloka’i by Alan Brennert
Published October, 2003; 416 pages
Here we find a novel that takes place in the 19th century but does not revolve around slavery. Instead, this novel will give book clubs the chance to talk about a unique topic: the plight of lepers who were forced to move to the island of Moloka'i and build their own community, where they stayed until they died. It focuses on Rachel, who is sent to the island at the young age of 7. She spends just about her entire life there, isolated from her family. Book clubs can discuss the political and moral issues around these leper colonies, the perseverance of people who face immense hardship and the effect of illnesses like this on families and communities.
My review
Discussion questions

Snow Flower and the Secret Fan by Lisa See
Published June, 2005; 272 pages
This novel takes us away from the United States all the way to 19th century China where we meet Lily and Snow Flower, two women who meet as young girls and become life-long friends. Book clubs will have plenty to talk about with this novel as it pulls the reader into a fascinating and sometimes controversial culture. From foot binding and the isolation of women, to the unique ways women communicated with each other and the societal norms of the day, there are many topics to discuss in depth.
My review
Discussion questions

Next week, I'll be sharing some 20th Century Historical Fiction novels that would make great choices for book club discussion. Please let me know if you have suggestions for other topics to cover, or if you would like to write a guest post for my Book Club Picks series. I'd love to hear about your book club!