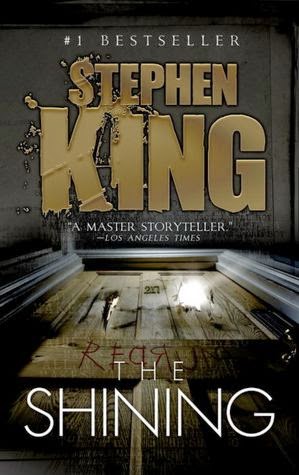 Jack Torrence has been struggling lately, but he's ready to turn his life around and reconnect with is wife, Wendy, and his son, Danny. So he takes a job as the winter caretaker of the Overlook Hotel, which sits on a mountain in Colorado. Because of the harsh winters, they will be snowed in at the hotel for several months, but this will be the perfect time for Jack to focus on family and to finally finish the play he's been writing. The hotel has other plans.

is a classic Stephen King novel. Most people I know have seen the movie, but I actually have not. I will say that I spent the entire time picturing Jack Nicholson in the role of the father, but the storyline was all new to me. I loved it. There's a lot of supernatural stuff going on in the story, from Danny's ability to read other people's minds, to the many ghosts of the hotel. But there was plenty of realism to make it interesting, particularly around the relationship between Jack, Wendy and Danny. They're dealing with a lot of real, fairly common family issues. Unfortunately, they're dealing with them in the wrong setting!

I liked the way the story unfolded slowly. I think everyone knows Jack eventually loses his mind (given the publicity of the movie), but I had no idea how or why it would happen, and of course had no idea what would happen after that. The suspense built up from the beginning of the novel and continued to build each step of the way. There is some violence in the story, but it wasn't overly gory. I honestly think it would be worse to see it on screen than to read about it. I also found it more suspenseful than truly scary through most of the novel; the last few chapters are where it becomes more scary.

Overall, it was a great way to get into Stephen King novels. I've only read his memoir, On Writing, so it was fun to read one of his novels. I definitely plan to read more.

This review was written based on a copy of The Shining that I borrowed from the library.