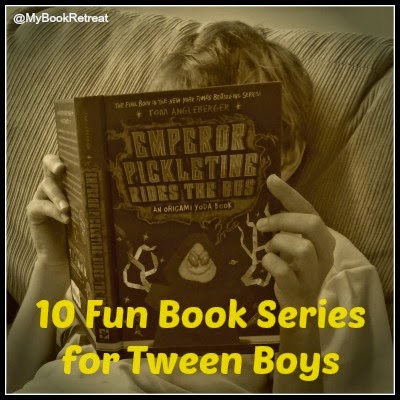 My 10 year old son is an avid reader who tends to gravitate toward popular series for his age group. I thought it would be fun to share his top 10 favorite series (in no particular order). These reflect his interest in fantasy, adventure, humor and middle school antics, which I expect many tween boys (and some girls too) share. With the exception of The Heroes of Olympus, all of these books have main characters who are tween boys (at least at the beginning of the series).

Percy Jackson and the Olympians by Rick Riordan

Heroes of Olympus by Rick Riordan

The Underland Chronicles by Suzanne Collins

How to Train Your Dragon by Cressida Cowell

Diary of a Wimpy Kid by Jeff Kinney

The Genius Files by Dan Gutman

Here are some quick links to buy the first book in each of these series on Amazon.com. These are affiliate links, so if you buy through these I'll receive a small bit of money to put toward future giveaways on the blog.