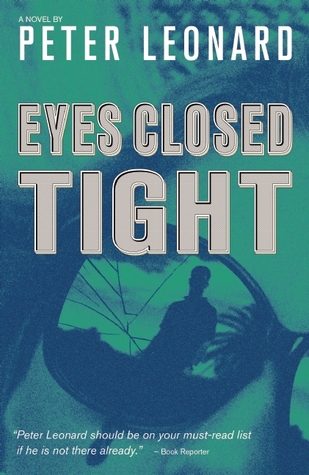 A former Detroit homicide detective, O'Clair left the force behind and moved to Florida. He bought a motel on the beach and is enjoying a quieter life. But when two different women end up dead on the beach in front of his motel, his old life pulls him back in. Soon he's wrapped up in the homicide investigation, digging into an old case that has too many similarities with this one.

Eyes Closed Tight by Peter Leonard is a fast-paced thriller that takes us along for the ride as O'Clair tries to put the pieces together before another woman is killed. This time, it's his own girlfriend who has been targeted. Told from multiple viewpoints, including that of the killer, the story is still suspenseful in that the killer's true identity isn't revealed until the end.

One of the best parts of this novel is the way the characters interact and speak to one another. The dialog is realistic and the relationships are as well. It has an easy going, fun tone throughout the story, even when things are a little tense. I did find some of the investigation into the killer a bit complicated at near the end, but it all came together eventually, and I finally figured out what was going on!

Overall, if you are looking for a suspenseful crime novel, you should check out Eyes Closed Tight.

This review was written based on a copy of Eyes Closed Tight that was provided by The Story Plant in exchange for an honest review.