Book Review: The Orphans of Race Point by Patry Francis 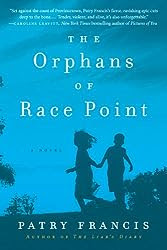 When Gus Silva is a boy, his father who is known for his temper kills his mother in a rage. Gus, who was home when it happened, stopped talking. Only Hallie Costa, the local doctor's daughter could break his silence. Years later, they fall in love. But another act of violence tears them apart.

The Orphans of Race Point: A Novel

by Patry Francis spans several decades in the lives of Gus and Hallie. It seems at first to be a love story, but it turns out to be much more than that. It covers many topis including friendship, love, religion, abuse, deception and forgiveness. The characters and their relationships seem genuine, and the storyline goes in unexpected yet realistic directions at times.

The story is told from a few different points of view, but each character has an entire part of the book, consisting of several chapters, so the alternating voices are not distracting. I also found that I was able to connect with each character very well because of this style. And it helped with the flow of the storyline as we were able to see how different characters spent the same portion of time, without having to jump back and forth between those characters' stories each chapter.

I personally loved the setting on Cape Cod, mostly in Provincetown. I grew up in Massachusetts (on Nantasket Beach, which is also mentioned in the book) and have been there many times. Francis definitely got the feeling of that setting down in this book. It's clear she's been there many times as well.

At more than 500 pages, this is a hefty read. But it is never boring. The story and the characters evolve and grow as each chapter passes. If you enjoy contemporary fiction with a bit of a mystery involved, I highly recommend it. The Orphans of Race Point would make a wonderful summer beach read!

This review was written based on an uncorrected proof of The Orphans of Race Point that was provided by TLC Book Tours in exchange for an honest review.