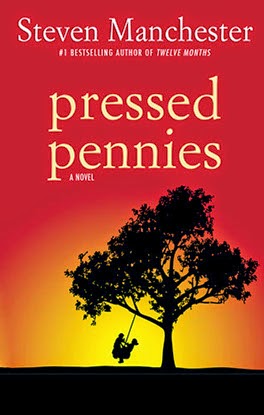 Pressed Pennies, a contemporary fiction novel by Steven Manchester, was released today by The Story Plant. I haven't made it far enough through the book to write a review yet, but wanted to let you know it's available today. It's a love story, so a bit calmer than my most recent reads! I'll write a full review once I'm done, but in the meantime, here's a brief synopsis from the author:

Rick and Abby grew up together, became best friends, and ultimately fell in love. Circumstance tore them apart in their early teens, though, and they went on to lives less idyllic than they dreamed about in those early days. Rick has had a very successful career, but his marriage flat-lined. Abby has a magical daughter, Paige, but Paige's father nearly destroyed Abby's spirit.

Now fate has thrown Rick and Abby together again. In their early thirties, they are more world-weary than they were as kids. But their relationship still shimmers, and they're hungry to make up for lost time. However, Paige, now nine, is not nearly as enthusiastic. She's very protective of the life she's made with her mother and not open to the duo becoming a trio. Meanwhile, Rick has very little experience dealing with kids and doesn't know how to handle Paige. This leaves Abby caught between the two people who matter the most to her. What happens when the life you've dreamed of remains just inches from your grasp?

Pressed Pennies is a nuanced, intensely romantic, deeply heartfelt story of love it its many incarnations, relationships in their many guises, and family in its many meanings. It is the most accomplished and moving novel yet from a truly great storyteller of the heart.


You can buy Pressed Pennies through Amazon, Barnes and Noble and other retailers.