Book Review: Zora and Me by Victoria Bond and T.R. Simon 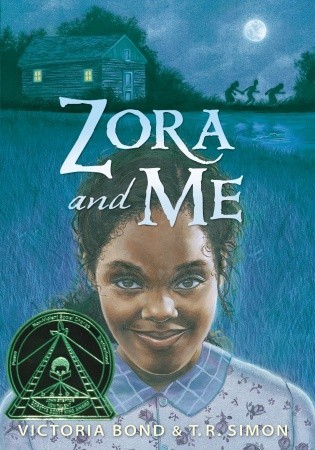 Zora Neale Hurston is an author who is best known for her novel, Their Eyes Were Watching God. Zora and Me is a middle grade novel by Victoria Bond and T.R. Simon that imagines Zora as a young girl who loves to tell stories. It all starts when Sonny Wrapped wrestles an alligator... and loses. Then Zora and her friends meet a man who turns up dead soon after. A mystery ensues, and Zora has a theory: a half gator, half man creature is to blame.

Zora and Me is a book that was part of my son's Battle of the Books. It's a historical novel that takes place in the 1960s. There are issues of racial segregation and discrimination, bringing some of the issues of that time to life for young readers. I will note that the n-word is used in this novel, in an appropriate context, but it was a bit jarring for me and led to some questioning in my mind as to whether to call it out and explain it to my 9 year old who read this book. I have not, but I'm still wondering if it might warrant a discussion.

Overall, I have to say I wasn't crazy about Zora and Me. I have never read anything by Hurston, so perhaps fans of hers would enjoy this more. I didn't think it held a lot of interest for younger readers. It didn't for my son. It doesn't get into a lot of the historical issues. It focuses more on the mystery of who the murderer is. And it just didn't pull me in. My son found the mystery a bit too scary. And I really don't think he got much out of it from a historical fiction perspective.