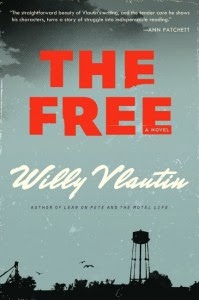 Leroy, an Iraq War veteran, wakes up with a clear mind after several years of being unable to care for himself or think clearly. In his clarity, he decides he would rather die than go back to the way things were. But his suicide attempt fails. Freddie, who works at the group home where Leroy lives, has his own issues, working two jobs and never making ends meet. Pauline is a nurse at the hospital where Leroy ends up. She is so focused on helping everyone else, she has a hard time helping herself.

In The Free, Will Vlautin tells the story of each of these characters, alternating chapters between them. We get to know Freddie and Pauline as they interact with Leroy, each other and many other characters along the way. And we get to know Leroy, his mother and his girlfriend through his dreams as he recovers in the hospital.

When I first started The Free, I had a tough time figuring out who everyone was and what was going on. Leroy's sections were particularly jarring. But as I read further into the story, and figured out what was going on with Leroy, I got hooked. And by the end, I was amazed at this wonderful, raw story being told. Vlautin touches on so many issues in this novel. I have to share the description from Goodreads:


The lives of these three characters intersect as they look for meaning in desperate times. Willy Vlautin covers themes ranging from health care to the economic downturn and housing crisis, to the toll war takes on veterans and their families. The Free is an extraordinary portrait of contemporary America and a testament to the resiliency of the human heart.

All three characters' lives intersect to some extent, but their stories are really rather separate throughout the majority of the book. Each chapter switches from one story to the other, but I found this to work very well. Vlautin gives us the opportunity to really get to know each main character, which I loved.

I highly recommend The Free to those who enjoy contemporary fiction. It's three interweaving stories that really get at the heart of the issues facing many Americans today.


This review was written based on a copy of The Free that I received from TLC Book Tours in exchange for an honest review.