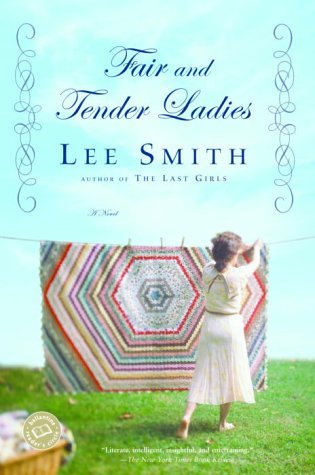 Ivy Rowe, born at the turn of the 20th century, lives in the mountains of Virginia and loves to write letters. Ivy writes to her family and her friends throughout her life. And it is through these letters that we get a glimpse into what life was like in this rural area of the country, and how progress in the first half of the century changed the lives of Ivy and those she loved.

Fair and Tender Ladies by Lee Smith was chosen as my book club's January selection, and I have to admit I wasn't thrilled. I read an excerpt of the book on Amazon and thought the dialect would bother me. But I ended up really enjoying the book. The dialect was a bit distracting at the beginning, but as Ivy grows older she actually begins to write in a more proper way. Besides that, Ivy and her story drew me in.

It begins with Ivy as a little girl writing to a penpal. She tells of her life in the mountains of Virginia and of her family, which includes her mom and dad and several siblings, and life on their farm. Through her letters, we learn that Ivy would like to go to school but is not able to because she is needed at home. She wants to be a writer. And that is why she writes her letters.

Ivy continues to write as she grows older. We hear about the changes in her family, including moves, marriages, births, struggles, successes and deaths. There is much heartache but that seems to be the way of the time and the location. I felt connected to Ivy ~ at times it felt as though she were writing her letters to me. She had a lot of spunk and an independent spirit that made me care for her and want to know what would happen to her.

Lee's writing style was almost poetic at times. Here is an example: "It is no end of work up here. But night comes in slow over Bethel Mountain and we watch it come, like it is sneaking in I reckon, stealing across the mountains ridge by ridge, they go blue and purple before your very eyes, and then the mist will rise."

Fair and Tender Ladies was a fascinating look at turn-of-the-century life in the mountains, with many interesting characters. Some of Ivy's letters were a bit slow reading, but overall, I recommend it to those who enjoy literary and historical fiction.

This review was written based on a copy of Fair and Tender Ladies that I borrowed from a friend.