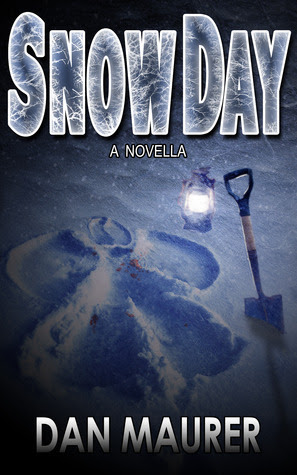 Billy was a 10 year old boy in 1975, having a blast with his friends in the snow, building forts, throwing snowballs, terrorizing each other as kids do. But a little fun turned into a horror that has stayed with Billy into adulthood, bringing nightmares every time the news reports a snow day.

Snow Day by Dan Maurer is a novella, so it's a short read. It also flows so well that you may find yourself reading it in just one or two sittings. It's a tale of innocence lost. And it's presented in an intriguing format that reveals the story in pieces, making it a suspenseful thriller.

As someone who group up in the ‘70s, this story really hit close to home for me. I remember when I was 6 years old, a girl in my town was abducted and later found dead. It was shocking for everyone. But even after that incident, my friends and I had so much freedom in our neighborhood. We played in the woods, far away from any houses, often. Today, I can’t imagine giving my children that much freedom. It’s too scary. But I guess the question really is: Is it more dangerous for kids now or are we just more worried about it and aware of it than our parents were? It’s an interesting question to think about, and it was the inspiration behind Snow Day.

If you're looking for a short thriller that will bring you back to a time of innocence, definitely check out Snow Day.

Dan Maurer is an independent author, publisher, theater producer, director, and digital marketer. He is also a proud member of International Thriller Writers, Inc. and the Horror Writers Association. Throughout his career in publishing and marketing, he has been involved in the publication of bestselling titles such as John Grisham’s The Firm, Richard Price’s Clockers, and Jim Lovell and Jeffrey Kluger’s Lost Moon, which became the film Apollo 13. As a digital marker, he has supported popular publishing brands including Curious George, Peterson Field Guides, and The Polar Express. He has also developed marketing strategies for many corporations, including Citizen, Dun & Bradstreet, RCN and Bristol-Myers Squibb. Dan is a member of an acclaimed New Jersey-based theater company and has won awards for his producing, directing and sound design. He lives with his wife and their daughter in Robbinsville, New Jersey.

This review was written based on a copy of Snow Day that I received from Pump Up Your Book! in exchange for an honest review.