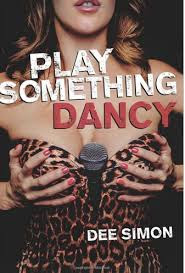 ABOUT PLAY SOMETHING DANCY

Los Angeles-based comedian, radio DJ, and host of the Sick and Wrong Podcast, Dee Simon has written a collection of comical and gut-wrenching personal essays about his experience as a strip club DJ in San Francisco in the early 2000s. Most of the stories in the book concern sex, drugs, venereal disease, and diarrhea or a combination thereof. Therefore, if you lack a sense of humor or are easily offended, you should probably put this one down. Having the “wet dream” job of most adolescents, Simon offers a biting, realistic, and hilarious depiction of what goes on “behind the black velvet curtains” at a gentlemen’s club from the perspective of the guy upstairs with the cheesy voice spinning Def Leppard songs.

If you read the description above, you'll probably realize this isn't the type of book I read all the time! But I really enjoy a wide variety of reading, and I was looking for something funny and off-the-wall. Something similar to what I'd get from David Sedaris. I don't offend easily, so I figured it would be a fun look into the world of strip clubs. Unfortunately, I didn't enjoy these stories nearly as much as I had hoped.

Most of the short stories in Play Something Dancy are about a different situation related to strip clubs. So there's one about how he got his first job as a strip club DJ. There are stories about the DJs and the lines they use and the songs they play. There's a story about a birthday party at the club, which does not end well for the poor birthday boy.

I will say it was an interesting look into the seedy strip club scene. But the stories just weren't that funny. I occasionally giggled, but mostly, it was just a lot of sex, drugs and profanity. The stories weren't very engaging and they weren't that funny to me. I did pass the book over to my husband, who read a couple stories, and he laughed a bit more than I did. But he also said the stories were missing something, either more humor or maybe just a punch line or something at the end to really make a point. Instead, they were just stories about things that happened.

If you are interested in what goes on behind the scenes at strip clubs, and you don't mind very graphic sex and lots of f-bombs, you may enjoy Play Something Dancy. It will take you into a world that you most likely have never been involved in. Just don't go into it assuming you'll be laughing your way through.

Dee Simon is a graduate of the University of Michigan. He lived in San Francisco where he hosted Rampage Radio, a metal and punk rock radio show on KUSF 90.3 FM. During that time, he also worked as a strip club DJ in gentlemen’s clubs located across the city. In 2006, he started up his own comedy podcast called Sick and Wrong Podcast which is recorded on a weekly basis. Currently, Dee lives in Los Angeles where he is pursuing a career as an author, comedian, and cruise ship magician. Play Something Dancy is Dee Simon’s first book.

This review was written based on a copy of Play Something Dancy that I received from Pump Up Your Book! in exchange for an honest review.