Book Review: All Over But the Shoutin' by Rick Bragg 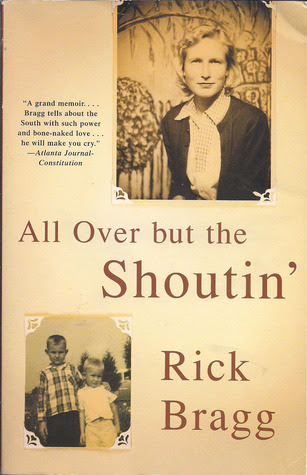 Rick Bragg grew up dirt-poor in rural Alabama. His father, when he was around, was not exactly nice. But he had a house over his head - thanks to relatives - and an amazingly dedicated mother. And he somehow grew up to become a Pulitzer Prize winning journalist.

All Over but the Shoutin' is Rick Bragg's memoir, which details his childhood and the events that led to his role as a respected journalist. The first half of the book is focused on his family and his early life living in Alabama ~ a life that started hanging on his mother's back in the fields while she picked cotton to feed her family. Then he shares his early days as a journalist, his drive to cover the darker areas of society. His trips to Haiti were particularly poignant.

While this is a memoir, it reads more like a literary novel for the most part. The stories of his childhood are raw and gripping. He truly paints a picture his life, his town, his mother. I could feel his emotions, the struggles and the pain. Bragg is obviously an accomplished writer.

If you enjoy memoirs, I highly recommend All Over but the Shoutin'. It's definitely one of my favorites.

This review was written based on a copy of All Over but the Shoutin' that I acquired through Paperback Swap.