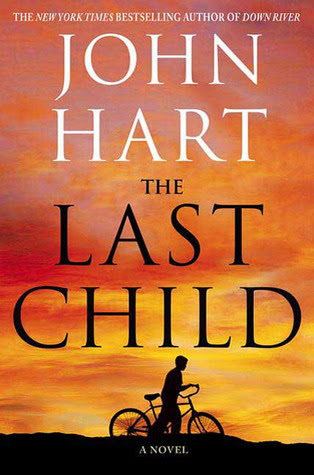 Johnny Merriman's twin sister Alyssa disappeared a year ago, and soon after, his father was gone as well. Left alone with his mother, who has succumbed to the bad influence of the richest guy in town, Johnny is determined to find his sister and restore his family. When another girl goes missing, he is hopeful that Detective Clyde Hunt and the rest of the police force will find a connection between the two cases, but he's also determined to keep looking for his sister himself.

In The Last Child by John Hart, we follow Johnny as he investigates the possibilities, watching each of the known sex offenders in the town, and trying to uncover the truth about what happened to his sister. There's a lot more going on in this story, though. There's his mother, who is drugged out and out of her mind because of her loss a year ago. There's his mother's boyfriend who has few redeeming qualities. There's the detective who obviously has a thing for the mother. There's the best friend, who has some serious issues with his own family. There's even the escaped convict who has his own agenda.

There are lots of characters and lots of different plot lines going on throughout this novel. And it's these various plot lines that have me conflicted. I thought this was an excellent mystery. I had no idea what really happened to the sister until the end when it was finally revealed. There were many interesting characters with engaging storylines. But at times, I felt like it was just too much. So many things that happened seemed completely implausible. Johnny seemed too adult; his mom too much of a screw up, the detective too obsessed. I think that's the issue. Each character was too over the top with their peculiarities or issues.

I would recommend The Last Child to mystery lovers, because it really is a good mystery. But just keep in mind that you may get annoyed with some of the characterizations.

This review was written based on a copy of The Last Child that I borrowed from a friend.