January 06, 2013
Today, I'd like to welcome David Sakmyster, author of the Morpheus Initiative trilogy. So far, I've read and reviewed two of the books in the series ~ The Pharos Objective and The Mongol Objective. I'll be reviewing the last book in the series, The Cydonia Objective, soon. 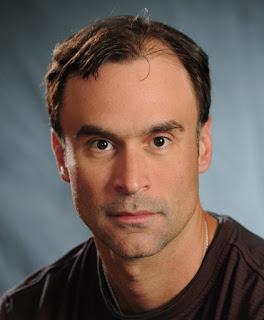 Q. Can you tell my readers a little about your Morpheus Initiative trilogy and what gave you the idea for it?

A. This trilogy came out of an idea I had while researching ideas for a short story set in the times of Caesar and Cleopatra.  I came across the story of a battle in harbor at Alexandria and just knew I had to use the great Pharos Lighthouse (one of the 7 Wonders of the World) as a setting. So in further research, I came up with a lot of intriguing bits about it, including the theory that Alexander the Great may have intended it to house the treasures of his empire – treasures which were never found. So there I was writing about one thing, and what I really wanted to do was to go another direction and investigate whether that treasure might still be there. But the lighthouse had toppled into the sea, and no one was sure where even the foundation was anymore – and that’s when I came upon the idea that perhaps, like in cases where police are baffled at a crime scene, we might benefit by using psychics to probe the past and find out the truth. So I did some further research and actually found out that there was such a team out there. A professor and a team of gifted volunteers used a psychic process called ‘remote-viewing’ to see if they could locate shipwrecks, lost artifacts, tombs and the like, with some success. They had even zeroed in on Cleopatra’s tomb in the late ‘70s. The fascinating story can be read in Stephan A. Schwartz’s The Alexandria Project. So that really inspired me to develop as my main characters, a team of psychics who try to solve some of the world’s greatest archaeological mysteries.

Q. What sorts of relationships and experiences do you most like to explore in your writing?

A. I’m especially drawn to relationships that we can all relate to – parents and their children especially. In the Morpheus Initiative books, there are strong family dynamics going on, with the main character holding onto tremendous guilt over not being able to help his missing (presumed dead) father, and resenting his mother and sister for their lack of perceived remorse. And that then gives an opportunity to develop those relationships, for the character to learn, and then, in the sequels when he has a son of his own, everything changes and he’s on the other side of things.

Q. What are your strategies for making characters seem real so the reader connects with them?

A. Because my stories tend to veer towards more fantastic subject matter, the key to making all of that real for the reader is to make sure they can connect deeply with the characters. That their language is realistic, that they struggle in their relationships and wrestle with everyday emotions and responsibilities, that they have deep flaws to complement (and often counter) their otherwise extraordinary abilities.

Q. What genres and authors do you most enjoy reading?

A. I love reading thrillers and horror novels especially, along with the occasional quirky novel. Some of the best things I’ve read recently were The Thieves of Manhattan (Adam Langer) and The City of Dreaming Books (Walter Moers). But I read everything by Robert McCammon, James Rollins and Peter Straub.

Q. I'll have to check some of those out! What are you working on now?

A. This year I published the final novel in the Morpheus Trilogy (The Cydonia Objective), and a standalone supernatural thriller, one of my favorites, called Blindspots. Now I’m finishing up a novel collaboration with international best-selling author Steve Savile. It’s called N.D.E., about a team of people who have had Near Death Experiences joining forces to try to understand the phenomenon. I’m finding it’s turning out to be like a cross between American Gods and The Matrix.

Thank you for stopping by My Book Retreat!