December 16, 2012
Today, I'd like to welcome author R.C. Richter to My Book Retreat. He is the author of the debut novel Crossing the Rubicon, which I'll be reviewing in January.

Q. Who or what inspired you to become an author? 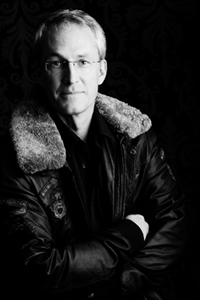 I started out as a commercial TV producer who had a production company called Midnight HWY Film Co in the 1990’s.  At the time I was reading and writing a lot of screenplays, on projects I was hoping to produce into films.  The story of Crossing the Rubicon, got its start in the spring of 1990 when my three business partners and I went on a caving trip to the Chungo Caves in Central Alberta, Canada.  The story evolved from that trip.

I first wanted to write it as a screenplay, but, the project was just too big.  So twenty two years later when the story once again came to me, I though the only way people will hear or read it was if I wrote a book.  So in the spring of 2012 I started to write my first book.

Deep down I was hoping it could someday be turned into a motion picture, which I originally hoped it would be.

Q. Can you tell my readers a little about Crossing the Rubicon?

Crossing the Rubicon, is the story of seven teens who start out on an overnight camping / caving trip at the Chungo caves in Alberta.  When they are deep in the cave, there’s a shift in time, where the space or area they are in, inside the mountain folds in time taking them back 275 years in the past.  When they leave the cave the world around them is not the same as it was when they entered.  There is no cell or internet coverage.  Their only means of survival is the clothes on their back and the few survival items they each carry.  It is a story of survival, friendship and an overwhelming need of the lead character, Trinity Warner to let her family know she is alright and living in another time.

The seven teens must work their way first to the west coast of Canada, then down to Mexico, and beyond.  It is their love for one another, and the need to let their parents know that they’re okay, that keeps them alive.  It helps when you have the knowledge of the 21st century behind you and the wherefore to know how things are to play out in history.  The story is a remarkable journey for the seven teens with a number of adventures along the way.  In their three years of travel they come of age and finally build a life for themselves.

Q. It sounds fascinating. I'm looking forward to reading it. How did you come up with the idea for the story?

In 1990 while I was exploring the Chungo Caves, I thought what if, while we were in the caves there was a fold or shift in time and when we left the cave we were 300 or more years in the past? How would we survive, would we?  At first it was a story of five guys, one was destined to die very early on in the story, but when I finally started to write the book twenty two years later, the characters had changed to three girls and four guys.  This made for a much better story with a purpose and appealed to a much wider audience and age group.  The characters and events were based on people I’ve known over the years.

Q. What are you working on now?

Currently, I’m working on the next saga in the Crossing the Rubicon story.  “Always Faithful”.  It picks up some years later from where we left off in “Crossing the Rubicon”.  Let’s just say the future for them was not how they thought it would be.   When you travel through time, and leave messages for those in the future, anything is possible.

Q. What are your strategies for making characters seem real so the reader connects with them?

Based them on what you know.  Twenty two years ago, I could have never written this book.  Twenty two years of living new experiences, having a wife and children makes you much wiser.  The characters in the book are based on real people I met or knew first hand, and from these people I was able to create characters who would deal with the strange world in which they were living in a believable manner.   To add to this, I would put myself into the story / events and then figure out how I would deal with them.   Writing about what I knew was key to making “Crossing the Rubicon” the story it is.

Q. What sorts of relationships and experiences do you most like to explore in your writing?

Love, friendship, honour and commitment are very important to me and drive the story of “Crossing the Rubicon”.  These are the things people love about the story and make them want to read it from beginning to end as quickly as possible to see how things turn out.

Q. What genres and authors do you most enjoy reading?

I like adventure stories, and time travel.  A good time travel story makes you think, and keeps you thinking for a long time after.  If at the end of a story I think to myself, that was smart then I am happy.  The other stories I like are adventure and survival.  Man against man is great.  Due to my background in, film production I read more screenplays than books over the years.  But my two favorite authors are David Mason, who wrote “Shadow over Babylon”, a book that at the time many thought was a true story of the assassination of Saddam Hussein. Another author I enjoyed reading is John Marsden, who wrote a number of great books, the first called “Tomorrow, When the War Began” is the story of a group of teens who have to survive and fight to live after their country of Australia, is overrun by an invading army.

Q. What do you enjoy doing when you're not reading?

I like to rebuild military trucks, which my company then uses for wild land firefighting in Alberta, Canada.  I also like to travel.  Seeing the world is very important to me.

I feel the same way about traveling. Thank you for visiting with My Book Retreat. I look forward to reading Crossing the Rubicon.

Come back next month to read my review of Crossing the Rubicon, and enter to win a copy of the book!