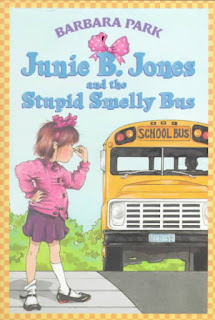 This is the end of Banned Books Week and unfortunately, I haven't had a lot of time to write about banned books this year. But I did want to include at least one post about it, so today I wanted to share one of the book series that it seems most people are surprised to find on the list: Junie B. Jones


The Junie B. Jones series came in at #71 on the American Library Association's list of the Top 100 Banned or Challenged Books from 2000-2009. Reasons cited are poor social values taught by the books and Junie B. Jones not being considered a good role model due to her mouthiness and bad spelling/grammar.

This is an interesting example of a banned book. Many times there are serious, controversial topics featured in books that are challenged. Things like homosexuality, drugs, vulgar language, etc. You can actually understand why people may not want their children to read those books, and why they may challenge their inclusion in school libraries or on required reading lists. But Junie B. Jones has been challenged because the books teach poor social values and because Junie B. Jones is a mouthy brat!

The first book in the series is called Junie B. Jones and the Stupid Smelly School Bus. That title is a good example of the language in the books. Junie is a kindergartner and she says "stupid" and "dumb" a lot. I've actually used it as a learning experience for my own kindergartner who is not allowed to use those words. We talk about the fact that we may read things in books, but just because the words are in books, doesn't mean it's appropriate for us to say them ourselves. She gets it, and so far has not started calling everything and everyone stupid and dumb!

The books are really cute and funny. We've only read a few but I plan to read most of the series to my daughter, at least until she can read them herself. Junie B. is always getting into big trouble, and rarely makes the right choices, but in the end everything works out and there's usually a lesson to learn. In the first book, some kids tell her terrible things about the school bus so at the end of the day, she hides in the school rather than getting on the bus. Obviously, this prompted a discussion about the fact that we should never do things like this!

The Junie B. Jones books are very funny, and as long as children are taught the difference between fiction and the real world, there's no danger in letting them read books like this. But if parents feel their own children shouldn't read them, they should make house rules about this. They shouldn't ban them from libraries so no children can read them.

Giveaway
I have a general Banned Books giveaway going on right now. But I'm also going to do a special giveaway: I'm giving away a copy of the first Junie B. Jones book: Junie B. Jones and the Stupid Smelly School Bus, to get you started on the series! To enter, just leave a comment telling me who you would read this book with. Be sure to leave your email address so I can contact you if you win! Enter by Monday, October 8 at 10:00 p.m. Eastern Time. Winner will be chosen by random.com.