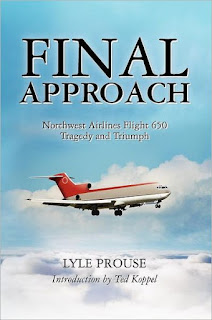 Today, I'm featuring a guest post by Lyle Prouse, author of Final Approach: Northwest Airlines Flight 650 Tragedy and Triumph. I will be reviewing his book tomorrow. But now, he shares a bit of his story and a few of his inspirational thoughts.

From The Author’s Mouth


I wrote “Final Approach” for my grandkids and family but had no intention of actually publishing it until a friend read it and strongly encouraged me to do that. The reaction has been surprising and I’ve been taken aback by it.

So much was said about this first-of-a-kind event in which three airline pilots were arrested for flying under the influence and most of it was inaccurate. Reporters and journalists, TV news anchors, and late night comics all had their say and put their own personal twists on things as I sat, watched, listened, and remained mute. I was amazed at reporters I didn’t know who claimed to know what I was thinking as though they had access to my innermost thoughts and how the public seemed to accept, without question, the information they put out.

Clearly, the groundwork for sensationalism was part of the scenario with an impaired flight crew at 35,000 feet and passengers in the aircraft cabin. I understood and accepted that and I never attempted to excuse or minimize what had taken place – nor do I do that in my book. Throughout the entire manuscript I take very clear and naked responsibility for the event. Indeed, I’ve done that my entire life, including my Marine Corps career and my time in Vietnam.

Nothing excuses or mitigates what happened, not even my alcoholism; and I’ve never hidden behind that.

This event destroyed and shredded me, reducing me to an emotional shell, and I found myself thinking thoughts I had never before believed possible – suicide. Hopelessness can never be reduced to a lower plateau than when suicide becomes seductively attractive and the desire to escape the pain and shame overwhelmingly outweighs the desire to live.

From that near fatal outcome came a story of beauty and redemption and one that I claim no personal credit for. I suited up and showed up, but I can take no credit for anything other than that.

As the story unfolded I experienced the absolute best of mankind … and the worst of it. We need love the most when we deserve it the least and I’ve never forgotten that as I devote a lot of my time to helping those who are suffering as I once was.

In front of me as I write this is a statement that says, “I believe life is 10% what happens to me and 90% how I react to it” and that has become one of my credos as a result of what happened to me.

I need others in my life and that’s a gift of humility, something I once viewed more as a character flaw than asset. I learned about humility through another form of the word – humiliation.

What began as the most devastating experience in my life, and one that nearly ended my life, has evolved into the greatest positive thing that could ever have happened to me. In my Native culture we often speak of ‘Grandfather’ or ‘Creator’ and I use those terms as well as the God I knew growing up. Whatever He does and however He does it will never be something I can understand, but I do know that some power somewhere steered the outcome of this story and I had nothing to do with it.

I went from pilot to pariah, yet in an astonishing turn of events I ended my career as a 747 captain for the same airline I’d so horribly shamed and embarrassed; and I never fought or resisted my termination. I went from prison to Presidential Pardon and even I, who was there every moment and lived every day of this, cannot possibly understand how it all occurred. 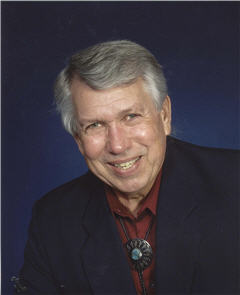 Lyle Prouse was born in Wichita, Kansas in 1938. He is part Comanche and grew up in an alcoholic home in a World War II housing project. He was active in his Native American community. After graduating from High School in Wichita, Lyle joined the Marines as a private but made the rare transition from enlisted to officer grade and ultimately Captain, a jet fighter pilot flying combat missions in Vietnam.

After his discharge from the Corps, Lyle became an airline captain for Northwest Airlines and flew for nearly 22 years before the same alcoholism that killed his parents almost destroyed his life. He was the first commercial pilot ever arrested and sent to prison for flying drunk.

The blistering media coverage was relentless as he was fired, stripped of all flying certificates, tried, convicted, and sent to Federal prison for sixteen months. The trial judge added sanctions on top of the conviction to guarantee he would never fly again. In spite of all the seemingly impossible obstacles, Lyle got sober, experienced many breathtaking miracles, returned to Northwest Airlines and retired as a 747 captain. In January of 2001 he received a full Presidential pardon from then President Bill Clinton.

Today, Lyle is a husband, father, and grandfather. He has been sober over twenty-one years and has devoted his life to helping others overcome alcoholism. He is still flying and has participated with all the major airlines in their ongoing alcohol programs. He remains active in Native American sobriety movements.

About the Book:
This is the story of the first airline pilot ever arrested and sent to prison for flying under the influence. He was fired by his airline, stripped of his FAA licenses, tried, convicted, and sent to Federal prison. This was a first. It had never occurred before.

Lyle Prouse came from a WWII housing project in Kansas and an alcoholic family where both parents died as a result of alcoholism. He rose through the ranks of the United States Marine Corps from private to captain, from an infantryman to a fighter pilot. He made his way to the pinnacle of commercial aviation, airline captain…then lost it all.

Today he is a recovering alcoholic with nearly twenty-two years sobriety. This story describes his rise from the ashes of complete destruction from which he was never to fly again. It is full of miracles which defy all manner of odds.

In a long and arduous journey, he eventually regained his FAA licenses. He never fought his termination; he considered it fair and appropriate.

Miraculously, after nearly four years, the President/CEO of his airline personally reinstated him to full flight despite the adverse publicity and embarrassment.

In effect, the President/CEO gambled his own career by taking such a risk on a convicted felon and publicly acknowledged alcoholic pilot.

In another stunning event, the judge who tried, sentenced, and sent him to prison watched his journey and reappeared eight years after the trial. He became the driving force behind a Presidential pardon although he’d never supported a petition for pardon in all his years on the bench.

Lyle retired honorably as a 747 captain for the airline he’d so horribly embarrassed and disgraced. He lives with his wife of nearly forty-nine years and has five grandchildren.

He continues to work with all the major airlines in their alcohol programs. He is also active in his Native American community, and he provides hope to those struggling with the disease of alcoholism, no matter who they are or where they are.