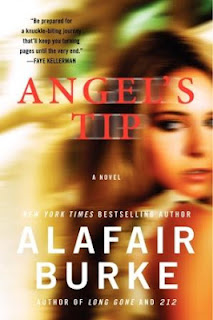 When college student Chelsea Hart stays behind at a New York Club after her friends leave, she doesn't realize a killer is watching her, waiting for this perfect opportunity. The next morning, Detective Ellie Hatcher finds Chelsea's body while out on a run with her brother. The obvious suspect is the guy she was last seen with at the club. But soon Ellie begins to realize they may be after the wrong guy.

Angel's Tip by Alafair Burke is a thriller with tons of twists and turns. While the reader is able to follow along with both the police investigation and the murderer's plans, I didn't figure out who the real murderer was until he was revealed near the end. I had plenty of suspicions though! Burke really sets it up to look like several people could be the one.

I found the characters in Angel's Tip interesting, but I will say I had some issues with Ellie Hatcher herself. While I liked the character, I felt that some of the dialog in which she is saying things a typical cop would say didn't feel true to her character. The other characters were interesting, but I didn't feel like I got to know them very well, and would be interested in seeing if the next book in the series, 212, dives deeper into some of these characters.

This is the second in the Ellie Hatcher series. I haven't read the first but it definitely didn't take away from this story. I could tell there were some references to things that happened in the first book, but I could follow along fine. It actually makes me want to go back and read Dead Connection now.

Overall, Angel's Tip is an engaging thriller that will keep you guessing right to the end.

This review was written based on a copy of Angel's Tip that I received from TLC Book Tours in exchange for an honest review.