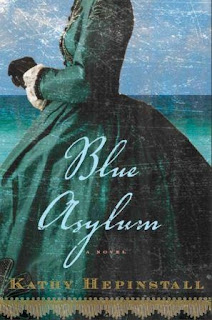 During the Civil War, Iris Dunleavy is declared a lunatic and sent to the Sanibel Asylum to be cured by the renowned Dr. Cowell. The doctor has a reputation for restoring women like Iris back to good, obedient wives. Iris insists she is not insane. She just went against her husband and has been sent away. And when she realizes no one will listen to her side of the story, she decides she will escape.

In Blue Asylum, Kathy Hepinstall brings the Civil War era to life in an unusual setting. In addition to Iris, a Virginia plantation owner's wife, we get to know Dr. Cowell, whose relationships with his wife and son are quite strained. We also meet Ambrose, a war veteran with whom Iris soon falls in love. This complicates matters as she wants to run away, but doesn't want to leave him. Hepinstall develops many other interesting characters, most of whom are actually insane.

I really enjoyed this historical novel, particularly the characters Hepinstall brought to life. And I liked the way she walked the line between sanity and insanity, looking at those who may be considered insane and trying to understand their perspectives. I loved the doctor's son, Wendell, who was stuck on the island with his parents and always worrying that he was insane himself.

The historical aspects of the story were appealing as well, including the stories Ambrose and Iris revealed about their pasts, and how they ended up in the asylum. This isn't the first book I've read in which a female character is sent away merely because she is unwilling to go along with social conventions of the time. It's rather disturbing to realize that although this is fiction, things like this did actually happen to women in the past.

Overall, I thought this was a wonderful, unique historical novel that would make an excellent choice for a book club.

This review was written based on an advanced reading copy of Blue Asylum that I received from TLC Book Tours in exchange for an honest review.

Giveaway
The publisher has graciously offered a copy of Blue Asylum by Kathy Hepinstall as a giveaway for one of my readers. To enter, just fill out the Rafflecopter entry form below. The giveaway ends at 10:00pm EDT on April 30, 2012. Per the publisher, this giveaway is open to US and Canada addresses only.