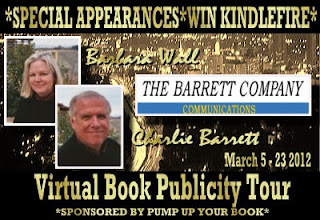 I'm very excited to participate in the Barrett Company Hollywood Book Publicity Tour. Read on for some information about The Barrett Company, an interview with Charlie Barrett, and a chance to win a Kindle Fire!!!

Charlie’s author clients have include LA author-screenwriter Carla Malden, author of Afterimage, Kindle’s John Locke/Lethal People, Julie Sinatra/Under my Skin, Warren Adler/War of the Roses, David R. Fett MD and Steve Langford/White Sleeper, Deby Eisenberg/Pictures of the Past, Marty Jurow/See’in Stars: A Show Biz Odyssey, actor George Kennedy/Trust Me, Peter Ford/Glenn Ford: A Life and Dr. Ken Nedd/Power Over Stress as well as many, many others.

Mr. Barrett started up The Barrett Company publicity firm after serving in top PR positions with the National Broadcasting Company (NBC) for more than ten years, where he was in charge of media relations for Johnny Carson’s Tonight Show and Today, among other well-known NBC shows such as Unsolved Mysteries, Fame and numerous highly-rated NBC specials, including The American Film Institute Awards and The American Movie Awards.

When earlier based in New York City, Mr. Barrett served as a book publicist to many major publishers with publicity campaigns for a number of best-selling authors from large trade book publishers from Scribners to Random House.

Mr. Barrett has also held executive media relations posts with 20th Century Fox Film Corporation in New York and Capitol Records in Hollywood, New York and London, where he helped launch recorded music by The Beatles, The Band and many other music artists including Joe South, Freda Payne, Bobbie Gentry and Glen Campbell.

Q. You’ve been a publicist for many years. What would you say is the biggest change you have had to adapt to over the years?

A. If there is one single adjustment it would be the evolving Internet and all the joy and sometimes frustration is has brought me and other professional publicists I have discussed this with. The "information highway" is for me one of the most significant achievements of the 20th century, right up there with flight and advances in medicine.  For a guy a scant 25 years ago who was using a word processor while working at NBC as a publicist and thinking I was being futuristic - -  the Net is now a place where I spend countless hours each day, both  contributing and also learning.  Social media is exploding in its impact on the literary culture and it is one to watch as it grows and grows. It has brought a lot of change with it.

Q. Tell me about one of your most satisfying projects as a publicist.

A. Right now we expect to get involved with a book from a special assistant to President Kennedy, but more about that later. It will prove to be a true blockbuster with its content. The most recently publicized  authors and books that have been among the most "satisfying"  I have directed PR  for include one from Los Angeles screenwriter-author Carla Malden (daughter of Oscar winner actor Karl Malden) who penned  the non-fiction book "Afterimage" from Globe Pequot Press and crime thriller author John Locke, who with his Donovan Creed novels like "Saving Rachel" became the first self-published author to sell 1 million books on Kindle in 2010.

Q. What makes The Barrett Company different than other publicity companies?

A. I think it is our interconnectivity with books/authors, movies and TV productions. No other firm I am aware of specialize in these three areas of PR creation. As a result some authors we have repped have had their books introduced to the Hollywood creative community and have had their published works optioned for production. Yes, that is what makes us stand apart from other PR firms...we are located in the heart of the world's creative center - - Hollywood - -  and we are connected through my years as both a former Hollywood journalist who has also worked in movies and TV as a publicist too before I expanded into book PR more than 10 years ago.

Q. What are some recent books you've worked on?

A. Among recent current titles are such fictional books as "The Clara Ann Burns Story" from Denver author Heidi Ann Smith  and "Pictures of the Past" by Chicago author Deby Eisenberg to the biography "Glenn Ford: A Life" by the famous actor's son, Peter Ford, published by the University of Wisconsin Press to "I Want To Help" by New York stock broker Thomas Laresca, a true story of beating cancer and crippling depression and how he was wrongly suspected of a crime he never committed. It is a powerful story in a mini-book of 18 pages that really touches the reader."

Q. What advice do you have for authors who are looking to hire a publicist for the first time?

A. I think it is crucial for a new author to get a good overview of how the publishing industry works and is evolving, especially with  e-books. When an author is ready for a publicist to help them, he or she should be able to get a complete rundown of what each publicist offers, a free-no obligation 10 to 15 minute consultation on the phone or in-person and a written plan from the publicist outlining what the publicist will do for the author for the agreed amount of time and money to be spent. We offer all of these and references too, if requested. It is trust and honesty that has to be established in an author-publicist relationship - - that is most important. We never take on a client we feel we cannot get media attention for. Never, ever. I also always caution authors on  so-called 'pay for performance'  publicist  arrangements which can be misleading and confusing to an author client, and in some cases, extremely expensive.

Q. Do you ever find time to sit and read for pleasure? If so, what do you enjoy reading?

A. Absolutely. I just finished Bill O'Reilly's best seller "Killing Lincoln" and cannot wait for his book on President Kennedy that is due out soon. To me Mr. O'Reilly is a fair, well-informed and painfully honest journalist, which we need more of these days.   I have also enjoyed "The Girl with the Dragon Tattoo" by Stieg Larsson as well as Anne Rice's  "The Wolf Gift."


Pump Up Your Book and The Barrett Company are teaming up to give you a chance to win a Kindle Fire!

Here’s how it works:
Enter the giveaway by liking, following, subscribing and tweeting about this giveaway through the Rafflecopter form below.

The Kindle Fire promotion will run March 5 – 23, 2012. The winner will be chosen randomly by Rafflecopter, contacted by email and announced on March 24, 2012.

To find out who else is participating and for more chances to win, visit http://www.pumpupyourbook.com/2012/02/09/the-barrett-company-hollywood-virtual-book-publicity-tour-march-2012-kindle-fire-giveaway/.

Contest is only open to U.S. and Canada residents.