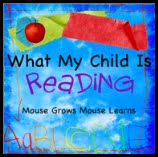 This week, M's theme at school was farms, so we read lots of farm books. 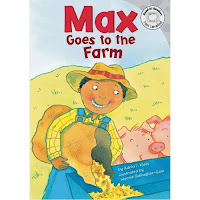 Max Goes to the Farm by Adria Klein is one of a series of books that C read when he was younger. M is now working her way through them as well. This one is about Max and his friend DeShawn visiting Max's grandparents' farm, and all the things they do there.

DK Readers On The Farm by Victoria Taylor is a LEGO book about the farm. Each page has pictures of farm-related LEGOs. There are pictures of animals, with sentences that tell us what sounds they make. And there are pictures of hay bales (yellow square blocks) and people working on the farm. It's a cute book that's easy to read.

The Cow That Got Her Wish by Margaret Hillert is a cute and silly story that features farm animals. It's about a cow that wants to jump over the moon. She tries all sorts of things, but isn't able to get high enough. Then a friend gives her a creative way to make her wish come true.

Baa-Choo! by Sarah Weeks is another book that features farm animals but isn't necessarily about what happens on a farm. This one is about a sheep who has to sneeze, but he can only get the Baa out. He can't get a Choo. So each of his farm animal friends tries to help him. In the end they all work together to get that Choo out.

Five Little Chicks by Nancy Tafuri is a cute story of a group of chicks trying to find something to eat. Each one finds something ~ a worm, a strawberry and other things ~ but in the end, they go with their mother hen to the corn patch to scratch and peck.

John Deere Big Book of Tractors by Heather Alexander is a book I've had on the shelf from when C was into tractors and farms a few years ago. It's a beautiful book full of pictures and information about all sorts of tractors and farm machines. M honestly wasn't very interested in it, but I think it's an excellent resource for anyone who has any interest in tractors!

John Deere Farm ABC board book. This is one from C's toddlerhood, but M enjoyed reading it and doing all the touch-and-feel and manipulations within it. Each letter has a simple sentence describing something related to the farm that starts with that letter.

Good Morning, Farm! by Catherine Nichols is a great nonfiction early reader. It covers several different animals, machines and activities that happen on the farm. It includes lots of colorful photographs.

Charlie the Ranch Dog by Ree Drummond is a picture book that I've reviewed before. It's a very cute story of a dog named Charile who tells us about all the hard work he does on the farm. Meanwhile, the other dog on the farm is running around doing everything, and Charlie takes lots of naps!

A Tale of Two Goats by Tom Barber is another one I'm sure I've reviewed before. This is a picture book about two farmers and their goats. Each goat prefers the other farmer's crop to eat, so the farmers build a wall to keep them separated. But in the end, they realize that isn't the best idea. It's quite silly, but has a good message of sharing and friendship.