Book Review: The Ruins of Us by Keija Parssinen 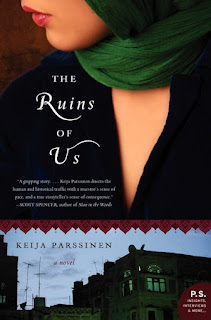 Rosalie has been married to Abdullah and living in Saudi Arabia for 25 years. The couple has two teenagers and although she is American, Rosalie has immersed herself in Saudi culture. But then she discovers that her husband has taken a second wife, after all these years, and her world comes crumbling down. Told in the voices of Rosalie, Abdullah, their son Faisal, and their American friend Dan, The Ruins of Us by Keija Parssinen takes us deep into modern Saudi Arabian culture, and the struggles between traditional and modern viewpoints.

I just loved this book. It is a beautifully written work of literary fiction that kept my attention from beginning to end. Looking back, there wasn't much action in this story. Parssinen spends a lot of time inside the four main characters' heads, sharing their thoughts, memories, reactions to the issues they encounter. But it moves at a steady pace. There is enough mystery in terms of wondering what will happen with the marriage, what Dan's role is, and what is going on with Faisal to keep the pages turning.

If you enjoy literary fiction, you will love this. Parssinen's choice of words, the language she uses to describe things, is just stunning. Here's just one short example:


The air on his face was miraculous, and the lights of Al Dawoun winked along the opposite shore like stars in a tilted sky. To his right, the causeway stretched into the darkness, its concrete supporters invisible so that it looked like it was floating the cars back to the Kingdom. (pg 48, advanced reader's e-proof)

The Ruins of Us is not a happy story. It's about a marriage on the brink of disaster, about a teenaged boy on a path to potential destruction, and a man who is still trying to find himself after a divorce several years before. Through these stories, Parssinen weaves in the complexity of Americans living in Saudi Arabia, and the struggles of children born to Saudi-American couples. With all of these themes running through it, I would say The Ruins of Us would make an excellent selection for a book club.

For more information, visit the author's website
Read an excerpt
Reading group guide for The Ruins of Us

This review was written based on a copy of The Ruins of Us that I received from Harper Collins Publishers through NetGalley in exchange for an honest review.

New comments are not allowed.