Book Review: The Buddha in the Attic by Julie Otsuka 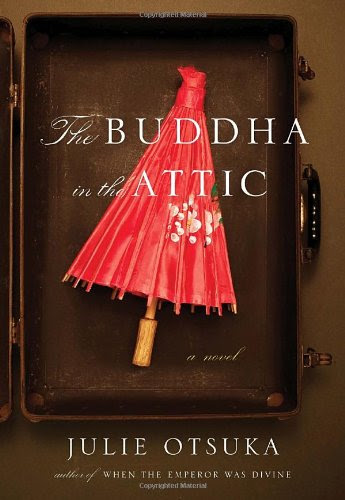 The Buddha in the Attic by Julie Otsuka is unlike just about anything I've ever read. It's written in a lyrical, collective voice that is quite unique. And I must say that while I appreciated it in terms of its literary quality, I got a bit tired of it as time went on. Here is an example from page 14:


On the boat we carried our husbands' pictures in tiny oval lockets that hung on long chains from our necks. We carried them in silk purses and old tea tins and red lacquer boxes and in the thick brown envelopes from America in which they had originally been sent. We carried them in the sleeves of our kimonos, which we touched often, just to make sure they were still there.

The entire novel, with the exception of the last chapter, is written in this collective third-person voice. Rather than following an individual woman from Japan to American to meet her husband for the first time, we hear the collective story of all the women who went on this journey. We hear of their trip across the ocean, and the anticipation and hopes and dreams of their future lives with their husbands. We hear of their first nights with their husbands, and the horror at discovering that they were not the wealthy, easy-living men they thought they were, but rather farmers and laborers ~ just like the men they could have married back home. We hear of the hard work they had to take on, the birth of their children and their interactions with Americans up through the beginning of World War II.

By providing this collective voice, Otsuka is able to give a fuller picture of the experience of "picture brides" who came to America from Japan in the early 20th century. She isn't limited to one person's experience with one husband, one job, one family. Rather, she is able to show the range of experiences among the these women. I understand her reasoning for using this voice, and I think it works very well from a literary and historical standpoint. But I will say it got old; I was definitely ready for a new voice by the time she finally switched to a different perspective in the last chapter.

Overall, this was a powerful work of literature that I would definitely recommend ~ if you like literary types of books. It gives you an amazing view of the experiences these women faced. The imagery is wonderful. But it's definitely not for everyone. In addition to the different writing style, there are also some disturbing descriptions of their first nights with their husbands, the botched births of their children and other brutal realities of their lives. Read the excerpt below to get a better idea of whether you would enjoy it.

Discussion questions for The Buddha in the Attic

This review was written based on an ebook copy of The Buddha in the Attic that I received from Knopf Doubleday through NetGalley in exchange for an honest review.