What My Children Are Reading: Eric Carle 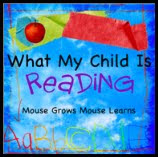 I thought about sharing all of the Halloween books we've been reading this week but honestly, most of our favorites are ones we read last year too. So I'm just going to direct you to my Great Halloween Books post from last year, where I reviewed Where's My Mummy?

by Steve Metzger, 10 Trick or Treaters

This week, in addition to reading those Halloween books, we also read several Eric Carle books. Last weekend, M picked out four books by Eric Carle at the library, and we already own The Very Hungry Caterpillar. So I figured I'd review the others.

The Very Busy Spider was perfect for this week because M's theme at Pre-K was Bats and Spiders. She even took this book to school on Thursday and read it to her class. She had read it once with help from me at home and her teacher said she did a great job. This is about a spider who is busy spinning her web. Other animals want her to do things with them, but she keeps spinning her web. It's an easy book to read, with lots of repetition for early readers.

Rooster's Off to See the World was another favorite. M even made a rooster of her own, which I wrote about on Just Playin' Around. This is the story of Rooster, who decides to go on a walk to see the world. Several other animals join him, but in the end, when they get cold, hungry or tired, they return home. Eventually, Rooster realizes he'd be much happier at home as well. I guess the message is that there's no place like home.

Little Cloud was an adorable book that I hadn't seen before. The illustrations are a little different ~ they are all painted in white. It's about a little cloud that turns itself into all sorts of different things as he drifts away from the other clouds. He becomes an airplane and a tree and a shark and a variety of other things. Then he joins up with the other clouds at the end to make rain. Like The Very Busy Spider, this book has shorter sentences and M was able to read a lot of it.

A House for the Hermit Crab is another new one for us. This has a lot more text on each page. It's definitely a read aloud in our home. It's about a hermit crab who finds a new home, but it's too plain. So he invites several creatures to join him on his home, including a sea urchin, star fish, coral and many others. It would make a great companion to a study of sea creatures, actually. It's much longer to read than most of the Eric Carle books we have, but it's quite educational and has a nice message about friendship and respect.

I also wanted to mention that starting next week, I'm going to be sharing picture books that we read in honor of Picture Book Month, which takes place throughout November. The Picture Book Month website has a calendar that features themes for each day of the month. We're going to read along with the calendar and then report on our books each weekend. So, next weekend will be books about the alphabet, outer space, seasons, bears and colors. I hope you enjoy it, and I encourage you to read more picture books in the coming month!