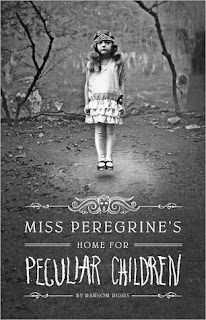 As a child, Jacob was fascinated by his grandfather, Abraham's stories of his childhood, growing up in an orphanage on an island off the coast of Wales during World War II. The stories were a bit unusual, though, as Abraham spoke of children who could levitate, lift giant boulders and be invisible. He had the pictures to prove it. But as Jacob grew up, he began to doubt his grandfather, just as everyone else in his family did, and the stories ended. Now, Abraham has died under unusual circumstances and Jacob has vowed to return to the island and find the home where his grandfather grew up.

by Ransom Riggs is a rather unique story. The first few chapters were extremely creepy to me ~ and the pictures interspersed throughout the novel made it even more so. As I was reading about Abraham's death and Jacob's initial experiences on the island, it felt like the makings of a horror story. But it turned out to be much more sci-fi and fantasy than horror. I especially enjoyed the contrast between the island in 1940 and that of the present day, as well as the unique characters Riggs created.

There is plenty of suspense and a bit of action, but underneath it all is an intriguing story about the individual people involved in the story ~ from Jacob to his grandfather and father, to the children who lived in the home with Abraham and the woman who took care of them. I don't want to say much more about the plot since one of the things I enjoyed most about the book was the mystery of it. If you like sci-fi and fantasy stories, I definitely recommend this one. It's a quick read that will keep you on the edge of your seat, and bring you into a fascinating world.

One last note: I generally read a lot of ebooks these days, but I read a review of Miss Peregrine's Home for Peculiar Children at Red House Books, which said that you have to hold the book in your hands. So I bought the hardcover and she was absolutely right. It just wouldn't have the same impact without the visuals that Ransom Riggs includes throughout the book. So if you're going to read it, get the physical book!


This review was written based on a copy of Miss Peregrine's Home for Peculiar Children that I purchased.