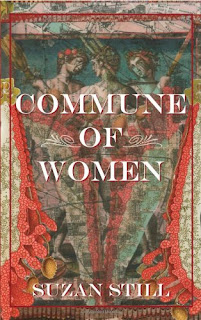 Six women embark on Los Angeles International Airport for various reasons ~ some arriving, some preparing to depart, some just passing through. None are expecting the chaos and horror that ensues when a terrorist group sweeps through the terminal, shooting everyone and everything in sight. Each woman finds herself thrust into a small break room for airport workers, and there they stay for four days as they wait to learn their fate.

In Commune of Women, Suzan Still delves into the psyche of women who come from diverse backgrounds to see the similarities and differences in how they react to a life-threatening experience. She also brings us into the mind of a seventh woman, Najat, who comes in with the terrorists, but is left alone in an airport control room, watching the events unfold on security cameras and TV. Her story was probably the most interesting of all to me. I really enjoyed reading her portion of the novel from beginning to end.

To pass the time and ease their nerves, each woman in the break room takes a turn sharing a story of her life, many of which are deeply personal stories of heartache and tough times. Through these stories, we get to know each character in more depth, and can better understand why they react the way they do as they wait for rescue or death to come.

As with most novels that feature multiple characters like this, I enjoyed some more than others. My favorite characters were Pearl, the bag lady who actually enjoys the meager accommodations, and Sophia, the one who takes charge and provides the strength the others need. I also enjoyed Betty's story when she finally shared it. But Heddi's and Ondine's stories just didn't hold my interest much, which is too bad since Heddi is a prominent character throughout the novel. I just had a very hard time relating to those two characters. And we don't get to know Erika much at all.

Because she writes from the perspective of seven different characters, Still includes the name of the character above each section so it's easy to keep track of who is talking and thinking. She also writes in the third person, using quotation marks when the person actually speaks. While this helps the reader keep track of whose mind we're in at the moment, I personally felt that a first person point of view would have worked better. I also had a very difficult time reading Pearl's sections because they are written in a strong dialect. I could understand the use of the dialect if the story was written in first person, but since it is not, it would have been much more enjoyable to read without the dialect.

Overall, the book kept my interest, although I did find some of the stories to drag a bit. It certainly has a strong beginning and ending! So if you're looking for an interesting character study with some suspense thrown in, I think you'll enjoy Commune of Women. It would also work well as a book club selection, since there are many different characters and situations to discuss. A set of reading group questions is included at the end of the book.

This review was written based on a copy of Commune of Women that I received from The Fiction Studio in exchange for an honest review.