We've been doing more reading at night these days, and the kids have actually picked up some new books that I can tell you about. C has been really focused on non-fiction lately, both at school and at home. It's funny because he only has a couple more Magic Tree House books to read and he hasn't wanted to read them. He'd rather look through some non-fiction books he has. 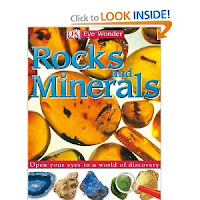 Two of those books are about rocks and minerals, and his interest in them was sparked by the video game Minecraft. The main book he got from the library is DK Eye Wonder Rocks and Minerals. He has a pocket version of the book as well: DK Eyewitness Explorers Rocks and Minerals. Both books are great resources for anyone looking to learn a bit more about rocks and minerals, metals, crystals and gems. The books tell how rocks are formed, how they have been used in history and what rocks, minerals and metals are used for today. The larger Eye Wonder book gives more detail, but both books are informative and filled with vivid pictures. 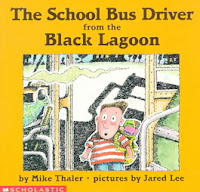 C did read a couple fiction books this week as well. He came home from school with two Black Lagoon books by Mike Thaler: The School Bus Driver from the Black Lagoon and The Librarian from the Black Lagoon. He had already read them at school but read them again last night. I really like these books because they show kids that you can't always believe what your friends tell you. In each book, he hears stories about something new (in this case the bus driver and the library) and it sounds like it's going to be scary. But in the end, the person or place turns out to be perfectly normal. The rumors were not true. It's a good lesson to learn. I will caution that the majority of the book is the narrator imagining encountering monsters and all sorts of scary stuff. So some younger kids may be frightened by the images. 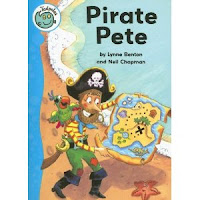 M read a cute book this week called Pirate Pete by Lynne Benton and Neil Chapman. It's part of a series of early readers called Tadpoles, and I think I'll be looking for more at the library. This book was about a pirate named Pete who gets a letter with a treasure map in it. He follows the map to an island and finds the treasure chest. Inside is a birthday cake, and his friends all appear to give him a surprise party. M loves parties so I figured she'd like this book, and she did. I think she was able to read the entire thing on her own so it's the perfect reading level for her. It's set up so she could use the pictures as clues, so she was able to read more difficult words like treasure, sailed and climbed. I think I had to help her with the word "island," which prompted a discussion of silent letters. 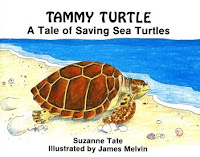 Her favorite book for read-aloud this week was Tammy Turtle by Suzanne Tate. This is a wonderful little book about sea turtles that covers the dangers they face in a way that doesn't frighten little kids. The book starts with a nest of eggs in the sand. Tammy is one of the baby turtles that comes out of the nest and heads for the sea. It talks of the "helpful humans" who keep the babies safe as they cross the beach, and I was able to tell M about my experience doing that a few years ago. Later, Tammy eats a plastic bag thinking it is a jellyfish and she once again is cared for by the helpful humans. In the end, Tammy returns to the beach to lay her own eggs. It's a simple story but it teaches so much about sea turtles, including life cycle, what they eat, predators, dangers of littering and how people can help animals like sea turtles.