What My Children Are Reading - Mercer Mayer

On Wednesday, M's school had a Mercer Mayer Day, so we brought in all the books we have by Mercer Mayer (some are by Gina and Mercer Mayer). A couple years ago, my cousin gave us five of these books that her son had outgrown. At the time, I didn't know much about this Little Critter series. And since then, we honestly haven't read them much. But they have such great messages that I wanted to highlight some of the books we have. 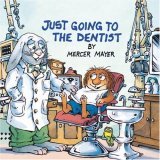 In Just Going to the Dentist, Little Critter goes into the dentist for a routine check up. He tells about playing with the toys in the waiting room and getting his teeth cleaned. Then he has X-Rays and has to have a cavity filled. He talks about the medicine they gave him (they show the needle but don't say it's a shot) and how his mouth got all numb. But he says it doesn't hurt and he got a treat at the end. I wish I had shown this one to C before he had a cavity filled recently. Although he was fine with it at the time too. 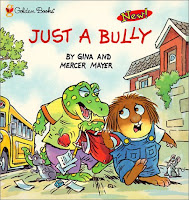 In Just a Bully, Little Critter tells a bully to leave his sister alone, and soon the bully is pushing him around instead. He tells his teacher, who talks to the bully, but things get worse. His sister tells him to punch him, but Little Critter is too scared. When the bully meets him by the bus and pushes him, Little Critter tells him to leave him alone, but he pushes him even harder. So Little Critter pushes back and they get in a fight. The kids all give Little Critter high fives. I'm sure some parents would have issues with this book, but I'm glad C read it because I do think he needs to learn to stand up for himself, even if it means fighting back when another kid pushes him around. I'm not crazy about the very end when Little Critter's sister pushes the bully and says, "Hey, Fathead! Leave my big brother alone!" I think it could have done without that. But otherwise, it's a good lesson for young boys especially. 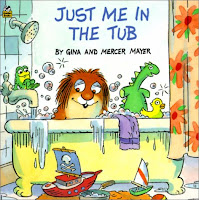 Just Me in the Tub is all about Little Critter taking a bath. He talks about how he gets everything ready for the bath, then explains all the body parts he has to wash, and tells about the toys he likes to play with. There isn't as much of a message in this one; it's more about taking a bath independently. And he has to clean up when he's done. 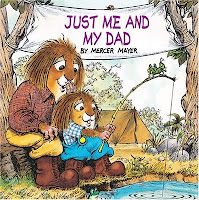 Just Me and My Dad is about Little Critter and his dad going camping together. He keeps messing things up, like getting the tent tangled up and submerging the canoe when he put it in the water. There are plenty of images of silly things that go wrong, so this book made M laugh. But in the end, he and his dad have a nice time together. 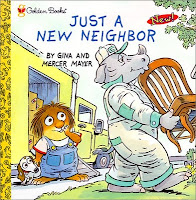 The last one we have is Just a New Neighbor. In this one, a new family moves in next door, and Little Critter hopes there's a boy his age who is going to move in. But it turns out to be a little girl his age instead. She wants to play, but he doesn't want to play with her. So he runs away from her, but she follows, jumping over a fence, crawling through briars and rolling down a hill. In the end, he realizes playing with a girl isn't so bad.


What have you been reading with your children this week? Hop on over to Mouse Grows Mouse Learns to share! And check out Book Sharing Monday too!