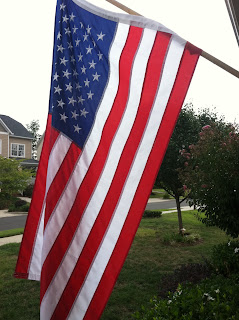 Today marks the 10th anniversary of the September 11th terrorist attacks. Last week, I reviewed a book called That Day in September by Artie Van Why. Click on the title to read my review. Today, I wanted to share some additional thoughts from the author about the reason he decided to write about his experience.

Every one of us has our personal 9/11 story; no matter where we were that day. My story happens to be that I was there at the World Trade Center that morning. That doesn’t make my story any more significant than anyone else's. It just makes it “my story.” A story I felt I had to put down in written words.

I didn’t set out to write a play or the book initially. I just began writing about that day for my own personal healing and coping. The more I wrote, though, the more I was able to face the emotions, the nightmares, the “survivor’s guilt.”

There isn’t a day that goes by when I don’t think of something I saw, or heard, or felt that morning of 9/11. In putting my story down on paper it helps me be “in charge” of the memories. It helps me face them, not try to avoid them.

There will come a time in our still distant future when people will only know of September 11 by reading about it in books or by seeing images or articles in film or print archives. It will be a history lesson for students in school. I believe the responsibility is given to us, then, to be sure the future generations will have real and honest accountings of that day and what followed. By telling my story (by all of us telling our stories), we can make sure that it will be remembered as more than just a day of facts and figures or political implications. It will be remembered as a day that humanity suffered one of its greatest tragedies.

I want to thank Artie Van Why for sharing his thoughts. I do believe in the importance of sharing our experiences, both good and bad, to not only help ourselves but also preserve a glimpse of reality for future generations.