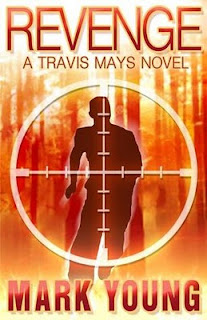 When the woman Travis Mays cares about is murdered, he blames himself and gives up his career as a detective. He moves to Idaho, to a cabin along a river where he is completely disconnected ~ no phone, no pager, no computer. But when Travis decides to take a kayaking lesson on the river with Jesse White Eagle, a beautiful Nez Perce guide, he suddenly finds himself right in the middle of a new case that he was destined to be a part of.

In Revenge: A Travis Mays Novel, Mark Young weaves a thriller that will keep you guessing until the very end. Jesse convinces Travis to help her father, who is the Nez Perce police chief, find her missing brother. What he doesn't realize is that Tommy's disappearance is linked to his own past, despite the fact that they've never met. Someone is out for revenge, and Travis is the real target.

This was a fast-paced novel, full of suspense. It was hard to know who was really good, who was really bad and how everyone was connected. It took a while to figure out who the guy who called himself Creasy really was. [As a fan of the film Man on Fire, I enjoyed the use of this character name.] And it took until the end to figure out how all the other characters were involved in the storyline. Every time I thought I knew what was going on, Young would throw in another twist!

I enjoyed the way the characters were developed, particularly Travis. And it was quite interesting to learn about the Nez Perce tribe through Jesse and her father, Frank, as well as the issues surrounding casinos, religion and other topics within the Native American culture. I also loved the descriptions of the river and the land where this story took place. I have a beautiful picture in my mind of that river and it makes me want to travel to Idaho now to see it in person!

The only thing I did struggle with is the ending. And since I don't like to include spoilers in my reviews, I don't want to say much. I just felt like there was a bit too much going on in the end, and some of it seemed rather unrealistic. I'm not sure how else to say it without giving too much away. But overall, I really enjoyed the book and would definitely recommend it to anyone who's looking for a well-written mystery with some interesting characters and lots of twists.

Read my review of Off the Grid by Mark Young

This review was written based on an ebook copy of Revenge: A Travis Mays Novel that I received from the author in exchange for an honest review.