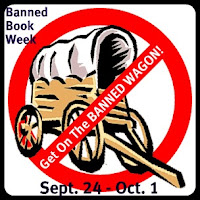 Today is the first day of the 2011 Banned Books Week. According to the American Library Association's website:

The ALA explains that every year, there are hundreds of attempts to remove books from schools and libraries. Many classics, such as The Adventures of Huckleberry Finn, The Catcher in the Rye and To Kill a Mocking Bird are among those challenged by parents, administrators and members of the community who believe they should be banned from children in their communities. Rather than making the books available to all, and putting the responsibility on individual families to decide if their children should read the books, challengers want to remove the books from the library shelves.

In 2010, a children's picture book topped the Most Challenged Books list. Today, I'd like to highlight that book. 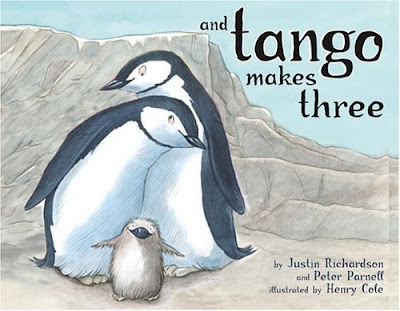 And Tango Makes Three, written by Justin Richardson and Peter Parnell, is based on a true story of two penguins living in the Central Park Zoo, who fall in love and form a family. The reason the book has been challenged so much is that the penguins are both boys.

The authors start the story by describing Central Park and the zoo that is located there. They talk about the people visiting the zoo ~ all types of families. Then they explain that the animals in the zoo are families too. When they arrive at the penguin house, Richardson and Parnell tell readers that each year, the girl penguins and the boy penguins start noticing each other and become couples. But one pair of penguins was different. Silo and Roy were both boys, but they did everything together. They even built a nest together.

Their keeper watches the penguins as they mimic the other penguin couples and try to hatch a rock. He decides to give Roy and Silo an egg that needs to be cared for instead. The penguins spend much time sitting on the egg and keeping it warm until the day it cracks open, and little Tango comes out. The zookeeper calls her Tango because "It takes two to make a Tango."

This story was very sweet and full of love. I read it to both of my kids and they enjoyed it as well. M loved the part where the egg cracks open, and C thought it was cool that the book is based on a true story. Neither made a single comment about the fact that Tango has two daddies.

I would highly recommend And Tango Makes Three to families with two dads, two moms or those with adopted children, as I think children in those types of families would be able to relate well to the character of Tango. I also recommend it to anyone who wants to show their children that families come in all different forms ~ as well as to anyone who likes penguins, of course!

Read more about Banned Books Week at Book Journey. You can also find more children's book reviews at What My Child Is Reading and Book Sharing Monday.

And check out my current giveaway: I'm giving away a banned book of your choice! Enter here!