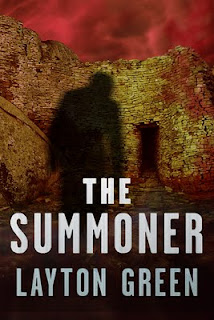 Dominic Grey is a diplomatic security agent working in Zimbabwe when he's assigned the task of investigating the disappearance of a U.S. diplomat. The circumstances surrounding the man's disappearance are unusual, to say the least. According to his girlfriend, he attended a religious ceremony in the African bushveld, was willingly led into the center of the mass of worshipers, and never returned.

In The Summoner, Layton Green weaves an intriguing and shocking story that goes far beyond a missing person case. Grey is joined by a beautiful liaison from the local government and a religious phenomenologist who all work together to discover what happened to the U.S. diplomat. The search brings them into the center of a religious cult.

Green's character development is excellent. The protagonist, Dominic Grey, is a character you can stand behind. His abusive childhood led to a life as a mercenary, but his morals are strong. He doesn't just follow orders; he does what's right. Nya Mushumba, the liaison, is a strong woman who has her own difficult history. And Dr. Viktor Radeck, the religious phenomenologist is fascinating in his line of work and his background.

In addition, Green's writing is quite enjoyable. I believe my vocabulary expanded greatly while reading The Summoner. His choice of words added literary interest to the intrigue and suspense. The storyline twists and turns and takes you on a ride that you can't predict. I will warn potential readers that there is an element of torture in this novel ~ both of animals and humans ~ that was absolutely horrific. But it makes sense in the context of the story and the overall plot was definitely worth the read. I had a hard time putting it down.

The Summoner is the first in the Dominic Grey series. Come back on Saturday to read my review of the next book in the series, The Egyptian.

This review was written based on an ebook copy of The Summoner that I received from the author in exchange for an honest review.