Book Review: The Keeper of Lost Causes by Jussi Adler-Olsen 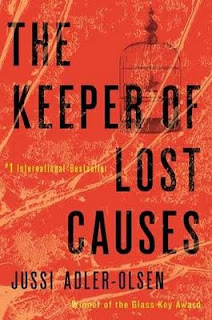 Five years ago, politician Merete Lynggaard disappeared and was presumed dead. But she is very much alive, being held captive by an unknown person who obviously wants her to suffer. Carl Mørck is a detective who is trying to recover from an incident that left one colleague dead and another paralyzed. To get him out of the way, he is made head of the new Department Q, charged with reviewing old unsolved case files that involve persons of interest. The first file he picks up is the disappearance of Merete Lynggaard.

The Keeper of Lost Causes by Jussi Adler-Olsen is one of the best detective novels I've read this year. Alternating between the voice of Merete and Mørck, we are put into these character's minds, feeling the pain and frustration they are both dealing with throughout the story. Adler-Olsen tells Merete's story of her confinement, but we also learn of her life before being kidnapped. With Mørck, we see a transformation from, frankly, an ass, to the potential of becoming more.

In addition to Merete and Mørck, Adler-Olsen introduces some fascinating characters, particularly Mørck's assistant, Assad. He is originally hired as a janitor/assistant but he becomes much more ~ and he provides a lighthearted attitude to offset Mørck's gruffness. I look forward to learning more about him in future Department Q novels. We also meet other detectives who are trying to solve another case with a little help from Mørck as well.

The mystery aspect of this novel kept me guessing from start to nearly the end. Who kidnapped Merete and why? Even toward the end, there are some open questions that will be answered in the next novel of the series. There are many twists and turns, but it's a fairly easy storyline to keep track of, and everything makes perfect sense in the end.

If you enjoy mysteries and thrillers, I highly recommend The Keeper of Lost Causes. It is translated from Danish, so the English isn't perfect. But it's an excellent story and the beginning of what I'd expect to be an excellent new series.

Check out the book trailer:


This review was written based on an ebook copy of The Keeper of Lost Causes that I received from Penguin Group through NetGalley in exchange for an honest review.