Book Review: Simply Genius! And Other Tales from My Life by Ervin Laszlo 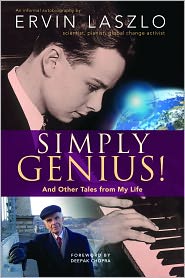 Ervin Laszlo has had a fascinating life. Growing up in Hungary during World War II, he was a concert pianist at a very young age. He went on to become a philosopher who has written numerous books and been nominated for the Nobel Peace Prize twice. In Simply Genius! And Other Tales from My Life

, Laszlo shares some of the stories of how he came to be the man he is today.

He tells of his time growing up in Hungary during the war in a family with Jewish ancestors. His shares stories of his living conditions when Soviet forces were in Budapest, and the short time he was sent away from his family to keep him safe. He also tells tales of traveling around Europe with his mother to perform and compete in piano competitions as a child. His love of music is evident, yet it's interesting to note that his mother had wanted to be a concert pianist but wasn't allowed to start playing until she was older. This is what prompted her to push her son toward the piano at a very young age, leading to his first public appearance with the Budapest Symphony Orchestra at the age of nine.

I enjoyed portions of Laszlo's memoir. I knew nothing of this man prior to reading the book, but his life sounded interesting so I wanted to read more about him. I will say that his childhood held my interest well. But once he got into his shift to philosophy and his stories of the universities where he worked and the projects he was involved in, he lost my interest.

The last portion of the book is much less memoir and much more detail about his theories and perspectives on the world. I will say I was drawn back in at this point, but it was a vastly different book. This section was a nonfiction review of his systems theories and the information field he calls Akasha, which I will not even attempt to explain, but you're welcome to look it up. The information he presents is a bit over my head, but it was quite fascinating at times.

I think Simply Genius! would be most appealing to those who are familiar with Laszlo's theories and thoughts about the world.

This review was written based on a copy of Simply Genius! that I received from Hay House Publishing through NetGalley in exchange for an honest review.