Book Review: The Sweetness at the Bottom of the Pie by Alan Bradley 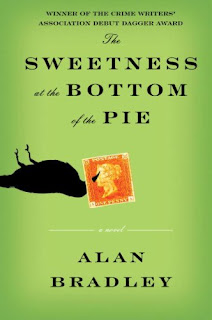 Flavia de Luce is an 11 year old girl living in England in the 1950s, who absolutely loves chemistry. She even has her own laboratory in the top floor of her family's estate, where she studies and conducts experiments ~ with a specific focus on poisons. She has two sisters with whom she she has nothing in common and a distant father, but she also has a confidant in the gardener, Dogger.

When a man is found dead in the estate garden, Flavia starts her own investigation into the crime. And when her father is arrested, she steps up her efforts to learn the truth about who the dead stranger is, how he is connected to her father, and who or what exactly killed him.

The Sweetness at the Bottom of the Pie

by Alan Bradley has been on my shelf for far too long. I really enjoyed Flavia and all the unusual characters the author introduces. A bit far-fetched in the way Flavia, who is only 11, gets away with tampering with evidence, the story is fun and kept me guessing as to what really happened to the stranger in the garden.

This is a charming mystery that I think I will likely re-read  at some point because I don't feel like I devoted enough time to reading and really catching all the little bits within the story and the characters that make this such a unique novel. I also want to check out the next books in the Flavia de Luce series since I enjoyed this one so much.

This review was written based on a copy of The Sweetness at the Bottom of the Pie that I received through PaperbackSwap.com.