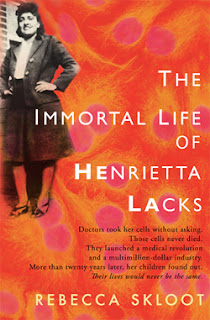 HeLa cells were the first immortal cells grown in culture ~ the most commonly used human cell line in research. HeLa cells have been used to develop the polio vaccine, and they have been used in research across just about every area from cancer to cosmetics to radiation. The original cells came from the tumor of a woman named Henrietta Lacks, who died shortly after being diagnosed with cervical cancer. Prior to her death, her doctor gave a researcher named George Gey a sample of her cells. The cells divided over and over again, unlike most normal cells that die out after a certain number of divisions. They are still dividing today, 60 years after Henrietta's death.

Rebecca Skloot heard about Henrietta during a science class when she was in high school. She became fascinated by this woman whose cells had become immortal, and decided to tell her story. That's what she does in The Immortal Life of Henrietta Lacks

She tells the history of HeLa cells, from the time they were taken from Henrietta through today, when more than 60,000 scientific articles have been written about them. But she also tells the story of the woman named Henrietta Lacks, a woman who grew up on a tobacco farm, moved to Baltimore and raised a family. She tells the story of Henrietta's children, who struggled to come to grips with the knowledge that their mother's cells were taken from her (without the consent of Henrietta or her family) and used to further research ~ and make lots of companies lots of money over the years. Yet her children can barely afford to go to a doctor themselves.

It's an amazing story from the perspective of science. The fact that these cells have had such an enormous effect on all sorts of research is remarkable. I'm sure anyone who has worked with HeLa cells would find the book even more interesting. But Skloot has not written this book for the scientist. She has written it for the general reader. While she talks quite a bit about the science behind the story, the real focus is on Henrietta's children and Henrietta herself. It actually reads a bit like a memoir of Skloot's experience researching the book and getting to know Henrietta's family. And it reads like a biography of Henrietta and of her famous cells.


Reading Group Guide for The Immortal Life of Henrietta Lacks

This review was written based on an ebook copy of The Immortal Life of Henrietta Lacks that I borrowed from the library.