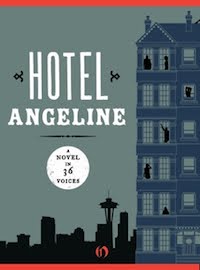 For six days last October, 36 writers took turns writing a novel, live on stage, during an event organized by the Seattle7Writers called "The Novel: Live!" ~  you can see the list of authors on The Novel: Live! website. Each author had a two hour time slot during which they were to write the next chapter in an evolving novel. Author Jennie Shortridge wrote the first chapter, and Susan Wiggs wrapped it up six days later. In between, authors came and went, adding their layers to the story. At the end of the event, they had a complete novel: Hotel Angeline: A Novel in 36 Voices.

I had heard about this event back when it took place in October, so when I saw Hotel Angeline available for review on NetGalley, I jumped at the chance to read and review it. I'm so glad I did. While some reviewers have said it seemed rather seamless, I would say the change in author was pretty obvious at the beginning of each chapter. But that was okay. Because that's what made this such a cool book to read! It's a great way to get a taste of 36 different authors' styles, and to see how they built on the details that were written by other authors.

As far as the story itself goes, I wasn't as crazy about it, but it was engaging and kept me turning the page. The story is about a teenage girl named Alexis who finds herself with complete responsibility for a residential hotel in Seattle after her mother becomes ill. The characters who live there are outrageous and fun. The situations they get into throughout the novel are suspenseful but quite unrealistic in many cases. However, the storyline does flow well from beginning to end, characters grow and change, mysteries are revealed, and everything is wrapped up well in the end ~ which is quite amazing with all the hands in the pot on this one!

I have a hard time rating this book. For the story itself, I'd give it a 3/5. It was a bit too far-fetched for me. However, for the book overall, considering the way it was written, I'd give it a 5/5. I would honestly recommend it to everyone because it is so unique. I think it would especially be appealing to writers, and all of the book bloggers and book connoisseurs out there!

This review was written based on an e-book copy of Hotel Angeline that I received from Open Road Integrated Media through NetGalley in exchange for an honest review. Following is more information about the book provided by the publisher.

36 Creative Authors of the Northwest Present Hotel Angeline: A Novel in 36 Voices

Thirty-six of the most inventive authors in the Pacific Northwest celebrate today’s ebook release of their original collaborative novel: Hotel Angeline: A Novel in 36 Voices. Each chapter written by a different author, and the finished product reflects the best voices in contemporary fiction, creative nonfiction, comedy, romance, mystery and thriller, and young adult genres. Provoking interesting questions about the creative process, this novel is by turns funny, scary, witty, suspenseful, beautiful, thrilling and unexpected.


Curators and contributors Garth Stein (The Art of Racing in the Rain) and Jennie Shortridge (When She Flew) created Hotel Angeline during the real-time writing performance called “The Novel: Live!,” in which bestselling authors Erik Larson, Julia Quinn, Kevin O’Brien, and Susan Wiggs, among many others, tackled their individual consecutive chapters all before a live audience. “Working on crafting the story into Hotel Angeline has been a pleasure. There's something about this project that glows when you hold it in your hands, and I hope the readers feel that glow, too,” said Garth Stein.