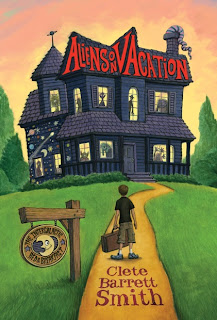 When Scrub is sent to his Grandma's house in the state of Washington, he figures his summer is going to be miserable. Instead of hanging out at the pool and playing basketball with his friends in Florida, he's stuck helping his Grandma, who he has never even met before, at her Intergalactic Bed and Breakfast. At first he thinks the odd tourists at the B&B are nutty sci-fi fans, but then he learns the truth: they're actually real aliens who have come to Earth for a vacation! So much for a boring summer!

In Aliens on Vacation

, Clete Barrett Smith's imagination brings to the page some fascinating creatures from outer space, and Scrub finds himself responsible for disguising them so they blend in with the earthlings. He also holds an even bigger responsibility ~ keeping the secret of the Intergalactic Bed and Breakfast from the rest of the townspeople, especially Sheriff Tate, who seems to know there's something strange about the people who are staying at the B&B.

This was a fun story with plenty of action and suspense. It's about a boy who learns to change his priorities and take on responsibility. In addition to hiding aliens, Scrub has to deal with regular kid stuff, like fitting in with the other kids in this new town and experiencing his first kiss. I read most of the book to my first grader, but he honestly lost interest. Some of the themes in the book ~ including the budding romance with Amy ~ were a bit old for him. I think it would be better for older kids ~ third grade and up.

I like the way Smith ends Aliens on Vacation. Many loose ends are tied up, but there is definitely room for an entire series to grow from this book. And I think the characters of Scrub, Grandma, Sheriff Tate and Amy are all interesting enough to make me want to see where the story leads.

This review was written based on an e-book copy of Aliens on Vacation that I received from Disney-Hyperion through NetGalley in exchange for an honest review.